Juniors Fall Short of Championship Round 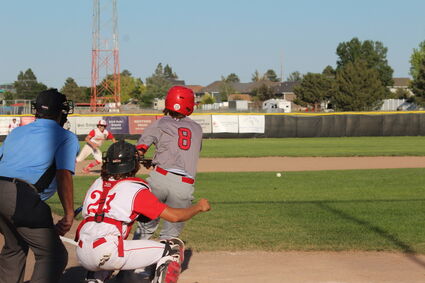 Sidney’s American Legion Post 17 Junior baseball team hosted the Class B Area 7 Junior baseball tournament over the weekend of July 8-12, and had some success, but fell in the qualifying game to advance to the championship to Chadron, 8-to-7.

Sidney had defeated Ogallala for the second time in the tournament on Sunday to get the opportunity to face off with Alliance in the Championship round, but was unable to get past a tough Chadron FNBO Nationals team Monday night.

Sidney started the game with Reid Fiscus on the mound throwing to Connor Hurt, and after the first two batters reached base, Fiscus found his groove and retired the next three batters.

In the bottom of the first inning, Fiscus singled and advanced to third base, but was left stranded on third. In the top of the second inning, Fiscus got the first out then hit a batter and issued a walk. A fielder’s choice scored a run, then a second run scored when Connor Hurt threw to shortstop with a runner taking second, only to have the ball go low and skip off into centerfield, scoring Chadron’s second run. A single to right field scored a third run, then Fiscus struck out the final batter looking with a great curve ball to get out of the inning.

With Sidney in an 0-to-3 hole, Patrick McCartney led off the bottom of the second with a double down the right field line, then scored on an infield hit by Zac McGuire. Another run scored on a passed ball, followed by a third on a fielder’s choice by Landon Riddle, and the game was knotted 3-to-3 at the end of the second inning.

Fiscus then retired the Chadron side in order, followed by Sidney going down in order in their half of the inning. In the top of the fourth inning, after retiring the first two batters on ground outs, Fiscus gave up a single, a walk, then an infield hit to load the bases.

A single plated two runs, and Sidney ended up surrendering four runs in the inning. Sidney bounced back in their half of the inning, getting back three runs and going into the last few frames down 7-to-8.

Anderson Smelley came in to relieve Fiscus, and retired the side in order with only five pitches. Sidney managed to get a few runners on, but left them stranded in their half of the inning. In the crucial seventh inning, Smelley let the lead-off batter reach on a walk, then an error by Jaggers gave Chadron runners at first and second with no outs.

A base hit scored a run, and a bad return throw allowed the runners to advance to second and third. A walk to Kobe Bissonette loaded the base, then Smelley induced two consecutive fly-outs to get out of the inning with Sidney down 7-to-9. Connor Hurt led off the bottom of the frame by working a four-pitch walk.

Quinn Bailey, who had relieved starter Trey Hendrickson, was replaced by Caden Buskirk to finish out the game. Anderson Smelley then struck out, followed by Patrick McCartney who then singled to get runners on first and second bases. Rhyder Bane then singled to right field, scoring Hurt and making the game 8-to-9. Zac McGuire then flied out to shortstop for the second out, then Kyle Jaggers struck out for the final out, leaving two Sidney runners aboard. The Juniors fell by a final of 9-to-8, needing just one more hit to tie the game and possibly plate the winning run.

Hendrickson was credited with the win for Chadron, while Fiscus took the loss for Sidney. Chadron outhit the Sidney Juniors 10-to-4, but it was five Sidney errors that made the difference in the game.

Chadron moved on to face Alliance in the Championship round, facing the unbeaten Alliance team. After Chadron took a 2-to-1 lead in the second inning, Alliance fired back with two runs of their own, and then took the lead for good in the sixth inning, winning the game 5-to-3, and advancing to the State Tournament in Wahoo.