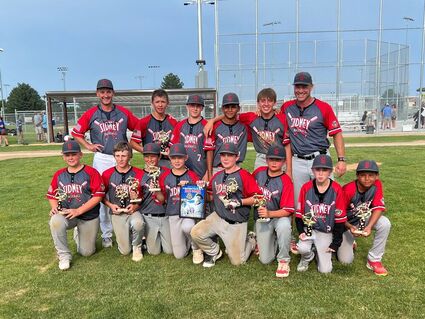 Sidney’s 12U’s captured the 2022 Nebraska Cal Ripken State Championship this past weekend in Gering with a dramatic come from behind 9-7 win over Alliance. Trailing 7-2, Sidney scored four runs in the bottom of the fifth  inning, all with two outs. Relief pitcher, Matt Corne, struck out the side swinging in the top half of the sixth inning. Sidney was down to their final out in the bottom half of the sixth inning when Aidan Baker kept the game alive with a ground ball single up the middle. Lead-off man, Austin Beutler hit a bloop single just over the shortstop's reach to put the tying and winning runs on base and with the count 2-1, Kole Fornander sent the next pitch over the center field fence ending the game.