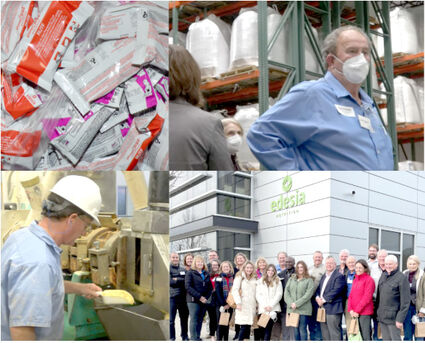 The U.S. Agency for International Development this week announced nearly $1.3 billion in additional critical humanitarian and development assistance to Ethiopia, Kenya, and Somalia, including $200 million for the procurement of Ready-to-Use-Therapeutic Food.

RUTFs, an energy-dense medical food paste made of soy, peanuts, powdered milk, vegetable oil, sugar and multivitamins, is one of the most effective tools to help severely malnourished children.

The U.S. is one of the world’s largest and most cost-efficient producers of RUTFs, but American farmers have the capacity to produce more.

This past spring, ASA urged Congress to provide $200 million in appropriations to procure RUTFs and double the global supply to reach more food insecure children across the globe.

ASA’s World Initiative for Soy in Human Health program works with companies like the Rhode Island-based Edesia, one of many enterprises that relies on U.S. soy to provide affordable, high-quality protein in its products designed to combat malnutrition, like RUTFs. U.S. soy growers applaud this new investment and welcome the opportunity to expand the industry’s contribution to global food security.

“U.S. soybean growers are proud of the role they play in global food security and today’s announcement from USAID Administrator Samantha Power is a significant investment in addressing global hunger and child malnutrition,” said ASA President Brad Doyle, a soybean grower from Arkansas. “Through the World Initiative for Soy in Human Health, ASA has partnered with companies like Edesia to increase the use of soy in ready-to-use therapeutic foods. Soy growers welcome the opportunity to provide more protein to feed those in need around the world and we thank USAID and the administration for this much-needed investment in RUTFs.”