A big part of a public park is having somewhere for children to play, to be themselves. They want to play, imagine, have fun.

Almost two years ago, two members of the Sidney community saw a downfall in the park and started asking why and why not. Why are we not including all children, and why are we not doing something about it. The children, people in general, include those who have mobility issues.

In December 2020, Madison “Madi” Wilkinson and Ally Benzel saw the need and followed “Why” not” with “if not us, then who.” They approached the Sidney City Council with the concept of redoing the playground at Legion Park. Their passion was to design a playground where a person in a wheelchair is a welcomed as a person who isn't.

At that time, the Sidney Park Project was supported by a group of about 10 people.

Ally Benzel told the Sidney City Council in a Zoom conference the goal was to create a destination park.

Wilkinson and Benzel told the city council the project would not be funded by tax funds. About a year and a half later, the park became reality and their promise was kept. In the grand opening of the new park, the park was overwhelmed with children of various ages and abilities running through the new play equipment with the excitement of adults at a new coffee house. Wilkinson and Benzel were equally as excited looking at the success of the project.

“It's crazy its here,” Wilkinson said.

She said the project actually started in 2019.

“When we started, Ally said it would take two to three years,” Wilkinson said.

Prior to the ribbon cutting and grand opening, a special night was held in recognition of the project supporters.

The process from concept to completion was a learning experience, Benzel and Wilkinson said.

They learned a lot about the community and how it will support a project, and they learned about writing grants and organizing people. In February of this year, the Sidney Park Project board announced they were nearing their fundraising goal. 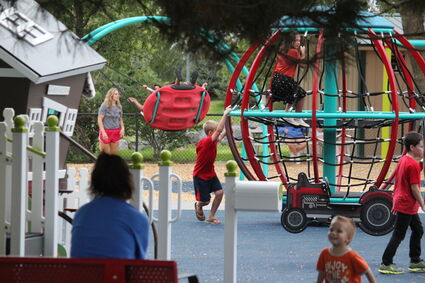 “There's so much talent in this community,” Wilkinson said.

“Thank you for believing in a dream,” Benzel said.

The project was funded with fundraising events, support from private organizations and residents and commercial. No tax dollars were used in support of the playground's construction.

Wilkinson and Benzel, and the Sidney Park Project board, worked with Outdoor Recreation in designing the updated playground.

The Board announced March 30 that the fundraising goal had been met, reaching the end with a “30K in 30 Days” campaign. The campaign was matched by an anonymous donor which allowed for a cement parking space at the playground.