A Century of Service 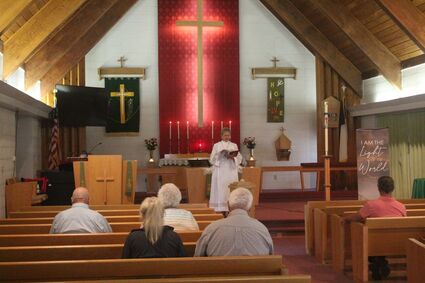 The Lutheran Church first made its presence known in eastern Cheyenne County in the late 1800s. St. John’s Lutheran Church occupied a site northwest of the Village of Lodgepole,

On Aug. 21, the Gloria Dei Lutheran Church will celebrate 100 years of service to the Lodgepole area.

The Gloria Dei Lutheran Church traces its history to a time when the environment was rough, the people were few, but those who came were a hearty stock who didn’t give in easily.

It was an area occupied by homesteading pioneers who broke sod on the empty prairie. Life was hard with some settlers living in sod houses and others in dugouts.

St. John’s Lutheran Church was one of the first frame-built buildings in the area. It was organized in 1888, and included a small two-room parsonage.

Nature then as now was not always easy. Sometimes it was difficult to the point where many families moved. In 1895, many of the original families left the area, forced out by drought and crop failures. Additional challenges like grasshopper infestation worsened the situation.

The church became vacant until 1909 when Pastor J.A. Bahnsen arrived. The congregation became active, building a larger parsonage in 1917.

In the late teens and into the 1920s, several families moved to Lodgepole. Together with families who were already in Lodgepole, a new congregation was organized in Lodgepole.

The first Lutheran worship service was held in Lodgepole in December 1920, and formally organized May 22, 1921.

Wayne Fraass, longtime member and retired Parish Ministry Associate (PMA), said at one time there were two Lutheran churches, the Immanuel Evangelical Lutheran and St. Johns. In the late 1920s, the St. Johns church declined to the point it was disbanded, according to church history. The old parsonage was torn down and the lumber used to build the present structure in Lodgepole… in 1932.

In 1954, groundbreaking for a new church was held. About 1,800 people attended the Feb. 12, 1956 ceremony. The old structure was demolished and the material used to build the new building.

Fraass is a member who has stayed through the changes in population and pastors. He said when he was in high school, he was asked about his dreams and aspirations. His answer was short, and predictive. He wanted to farm, and preach. Later in life he became a PMA, certified in 2000 and preaching for 13 years. He said there is a “certain bond” with the church. It is like a family. 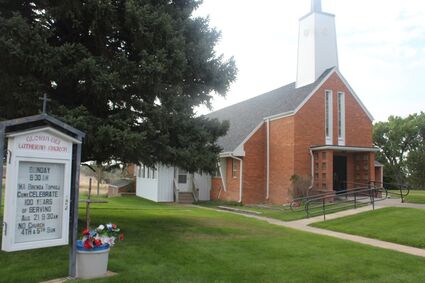 He recalls when he was young and the Sunday School classes in the parsonage, and the youngster who earned the most points getting to ride a two-wheeler.

“I continued going, got married, became interested in ministry,” he said.

For a time, four churches were sharing resources, pastors. Gloria Dei Lutheran in Lodgepole, Grace Lutheran in Chappell, berea Lutheran northeast of Chappell and St. Marks's Luteran in Oshkosh decided to yoke together.

Then it was reduced to Lodgepole and Chappell sharing pastors.

A special service will be held 9:30 a.m. Aug. 21 in celebration of the church's century anniversary. The celebration will include a fellowship lunch after the service.