Longhorn Football Back and Ready to Play 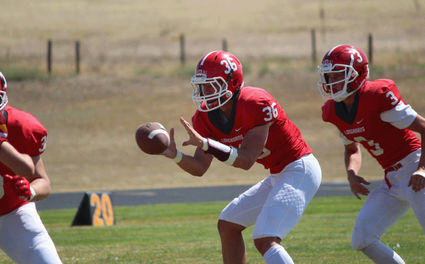 Last year, the Kimball Longhorn Football team had to forfeit all of their games due to lack of players. However, the team is back and ready for a full schedule of games for the 2022 season. Under the direction of new Athletic Director and Head Football Coach Darrell Howitt, the Longhorns look to bring the community together with four home games at Keith Staehr Field.

Howitt is a native of Kimball, and graduated from Kimball High School. He looks forward to having the community back and watching football games, and notes that there’s excitement in Kimball about the return of the Longhorn team.

Kimball will field an 8-Man team, and is getting prepared for the challenge of a new team figuring out what talent they have, and how they will gel together as a team.

Howitt says he has a few seniors that have shown leadership ability and has a group that is eager to play and get Kimball back on the football map. Howitt says the goal is not only to field a competitive team this year, but to re-build a tradition and ensure the Longhorn Football team is out there every year and is successful.

The team starts its season on the road in Dalton on September 2 against a tough Leyton team that went 7-and-3 last year with a playoff win against Hyannis. They next go on the road again on September 9 against St. Patricks, who finished with an 8-and-2 record, good enough for first place in C2 District 6. These two challenging games should give the Longhorns a good sense of what kind of team they have, and to make adjustments. They open their home schedule on September 16, hosting Perkins County, who finished second in D1-11 last year.

The Longhorns will have many challenges getting back to being a competitive team in D1-8 Man Football, but they have an eager group of athletes willing to put in the work necessary, a coach with a focus on getting the team ready while building for the future and an entire community behind them ready to cheer on their home team and get back to enjoying Friday Night Football.