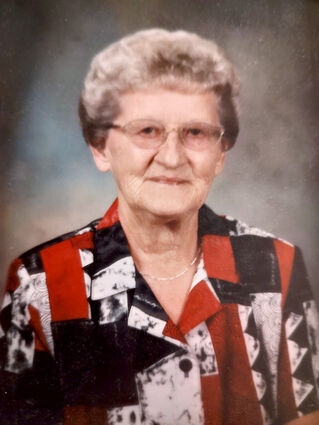 Eileen was a devoted mother, sister, grandmother, great grandmother, and caring friend who left us on August 12, 2022, following a prolonged struggle with complicated health issues.

Eileen was a Nebraska girl through and through. She was the second of four children born to Hilbert (Hib) and Gertrude Borcher in Sidney, Nebraska on August 28, 1929. She attended school during her formative years at the county school at Bunker Hill before moving to Sidney and graduating from Sidney High School in the Class of 1946.

After graduation, Eileen married and raised four children while working primarily as a bookkeeper/office manager at several Sidney businesses. Following the closing of the Sioux Army Depot, Eileen moved her two youngest children to Herlong, CA where she worked as a bookkeeper for the U.S. Army. While living in CA, Eileen married Floyd “Sonny” Worth, Jr. of Dalton, NE.

Life in the “Golden” state was good as they enjoyed camping and boating outings at Eagle Lake with her sister and brother-in-law Shirley and Ed Raulinaitis. Numerous stories still circulate among family and friends of sometimes raucous “garage parties”. Eileen always joked when asked about her secret to longevity of life by saying “The secret is a Coors Light a day”.

The 70’s brought Eileen and Sonny back to Nebraska and the Sidney/Dalton area. Eileen went to work at Cabela’s Inc., as a bookkeeper/accountant for the next 18 years. Following retirement and the passing of her husband, she moved to Lincoln.