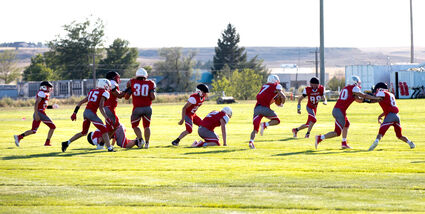 The Cheyenne County area schools are gearing up for the start of the Fall Sports season this week, and all of the teams look to get a strong start and have successful campaigns.

Potter-Dix starts off on Thursday hosting a Volleyball Triangular in Potter against Leyton and Minatare. The Lady Coyotes look to improve on last year's 11-and-18 record, and face off against a Minatare team they had success against last year and a tough Leyton team that will show the Lady Coyotes where they stand as the season opens. The Potter-Dix Football team, off an undefeated regular season and trip to the State Championship game last season, looks to win it all this year. Senior standout Luke Kasten looks to lead the Coyotes all the way, and Head Coach Dale Frerichs will have some challenges replacing graduated standouts Thomas Muldoon and Jared Anton.

Potter-Dix starts their season Friday at 2 p.m. at Minatare, a team that struggled with a 1-and-7 record last year. Look for the Coyotes to have no trouble against the Indians, and get younger players fully involved in the game.

The Leyton Warrior teams are ready for the season, and start off this week with the Cross Country team heading to Scottsbluff on Thursday. Also on Thursday, the Lady Warrior Volleyball team opens in a Triangular against Minatare and Potter-Dix in Potter. Last year;'s team opened the season with five match wins in a row en route to a 16-and-13 record, and looks to improve upon that mark. The Warrior Football team looks to improve upon last year's 7-and-3 record and second place D2-10 finish, and travels on Friday to start the season against a Hemingford Bobcats team that struggled last year with a 1-and-7 record, its lone win coming by forfeit. 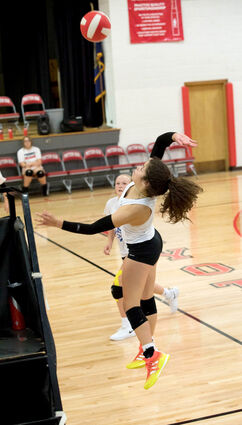 The Creek Valley Storm starts their Fall Sports season with the Girls Golf team traveling to Chimney Rock Golf Course on Thursday to compete at the Bayard Invitational. The Volleyball team also starts their season on Thursday, traveling to Grant to match up against Perkins County and Sutherland in a Triangular Meet. The Storm Football team starts their season on Friday, with a 1:30 p.m. kickoff against Sioux County in Harrison. The Storm looks to avenge last year's two-point loss to the Warriors in the opener.

In Peetz, the Bulldog teams start their Fall Sports season on Thursday when the Volleyball team travels to Fleming to match up against the Lady Wildcats, and it should be a very tough match for the Lady Bulldogs as the Fleming girls are coming off a 23-and-6 season where they went deep into the post-season brackets.

The Bulldog Football team opens on the road on Friday night against a Kiowa Indians team that went winless last season, so it will be a great opportunity for Peetz to get a fast start to the season.