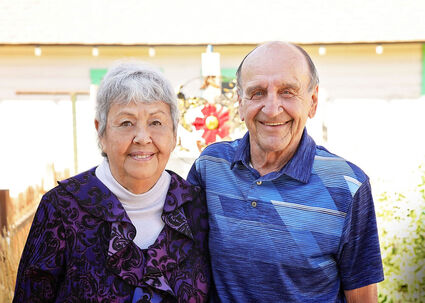 Gary was born and raised in Stuart, Nebraska in the north central sandhills. He graduated from Wayne State College and received graduate degrees from the University of Arizona in Tucson and Kearney State College. Georgia was born in El Paso, Texas but shortly moved to Anaheim, California where she grew up and graduated from Anaheim Union High School. Coming to Nebraska in 1971 was a welcomed move. She became a farm wife and six years later went to work as the Secretary and later administrator of the Stuart Nursing Home and also managing the Low-Income Housing apartments. She served as the President, Secretary and Treasurer of the American Legion Auxiliary plus serving on the Education Committee and various other committees in Stuart.

Georgia worked as a secretary-bookkeeper at Lodgepole Public Schools and was a member and two term president of the Lodgepole Lions Club. She is a past champion of the Chappell Ladies Golf Tournament and is currently CEO of Addison Inc. Her goal in life is to try and get a lower score than Gary every time they are on the golf course.

Georgia and Gary have been in the Lodgepole community for 26 years. They believe in contributing to the community and have strived to do it. They have thoroughly enjoyed every minute of it!

They are humbled and honored to be selected as Grand Marshals for the 98th Old Settlers Days celebration. Their wish for every one is to have a great weekend.

The Old Settlers Committee invites you to come and enjoy the 4 days of activities.