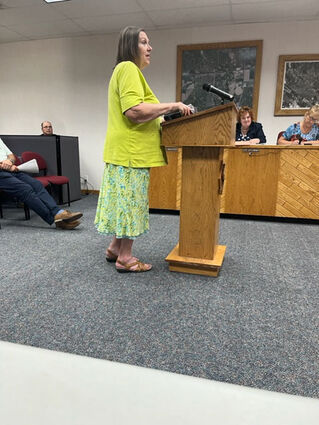 The Sidney City Council will be returning to a later meeting time. In a previous meeting, Mayor Roger Galllaway suggested changing the time from 6:15 p.m. to 7 p.m. He said the change was offered because he was asked to take a football coaching position, which could interfere with the current 6:15 p.m. Tuesday city council meetings.

“Most of this came about because my work responsibilities changed,” Gallaway said in the Aug. 23 meeting.

He offered to change the meeting time seasonally, or permanently.

“I think if we make a change, we not make it seasonal,” said Vice-Mayor Bob Olsen.

Olsen moved and councilwoman Marva Ellwanger seconded for changing the meeting time to 7 p.m. The move was approved with a 3-2 vote; councilmen Brad Sherman and Burke Radcliffe voting against the change.

The council also approved changes to the City's drug policy. Human Resources Director Autumn Ramirez told the council the changes are due to changes in the Federal requirements.

The city council approved the initial drug and alcohol program in January 1996 for DOT and NONDOT, and then approved changes in April 2014 to the DOT-FTA program, and all policies in June 2018. Ramirez recommended the City adopt the testing policies to comply with the Federal regulations.

“Because of grant funding we receive from the Nebraska Department of Transportation, the DOT-FTA policy needs to be submitted to NDOT with Council approval by September 30 to stay in compliance with their guidelines,” she said.

Federal regulations require the City maintains two polices for the Department of Transportation FMCSA and the FTA programs. Ramirez said the only option would be to discontinue the non-DOT policy.

The City's testing policy includes Pre-employment, Random, Reasonable Suspicion, Post-Accident, Return to Duty, Follow-Up. Cost to the City will not change with the updated policies. Currently, the City budgets $6,500 annually for the drug program.