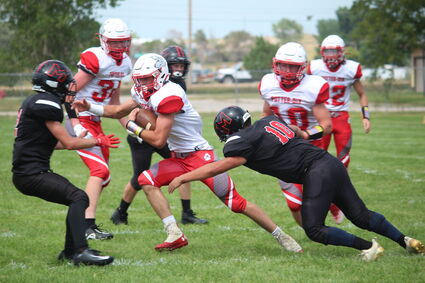 Potter-Dix’s Coyote Football team opened its season on the road Friday afternoon and took the first step towards another D6 playoff berth with an overwhelming 85-to-6 victory over the Minatare Indians. After dominating the competition last season, the Coyote’s first opponent was against a team that struggled with a 1-and-7 record last season. A mismatch on paper turned into a mismatch in reality as the Coyotes wasted no time in opening a big lead against the Indians.

After Mintare’s initial kick off went out of bounds, Potter-Dix senior Luke Kasten ran for a long touchdown on the first play from scrimmage and a completed extra point pass to senior Zach Rotert gave the Coyotes a quick 7-to-0 lead. Potter-Dix then squibbed a kick on the ensuing kick off, and recovered the ball. Again on the first play from scrimmage, Kasten ran the ball for another quick touchdown and it was suddenly 14-to-0. After Minatare went three-and-out on their series, junior Brayden Kasten received the punt and returned it all the way down to the Minatare one yard line. On one of the few miscues by the Coyotes, Luke Kasten then fumbled trying to score up the middle, giving the Indians the ball back deep in their own territory. The Indians tried a swing pass from the end zine, but again Luke Kasten quickly got in the back field and made the tackle for a safety. After Minatare tried an onside kick that was recovered by Potter-Dix, Brayden Kasten gained yards on a run, then was followed by Luke Kasten again breaking free for another touchdown. The score was then 23-to-0 and the rout was in full swing.

On Minatare’s next series, deep in their own territory, Luke Kasten showed off his athleticism when the ball was snapped back to Minatare sophomore Logan Gomez. The snap was high, causing a hesitation, and giving Luke Kasten the time to rush over the line and get to Gomez. But before he could be tackled, Gomez pitched the ball back to junior Jay Petersen to attempt a pass. Kasten pushed Gomez straight back into Petersen, causing Petersen to fall down while attempting the pass, and drew an intentional grounding penalty. Then on the one yard line, Luke Kasten blasted through the line again and corralled Minatare junior Miguel Calihua-Gonzales in the end zone for his second safety of the quarter. After the ensuing kick off went out of bounds again, Potter-Dix junior Jaxen Buettenback took a hand off and cruised down the field for another touchdown. At 32-to-0, Minatare finally got a break when the Potter-Dix kick off went off course, and the Coyote kick off team got caught on the wrong side of the field. Calihua-Gonzales was able to maneuver through the Coyotes, and broke free for a kick off return touchdown. A failed extra point made the score 32-to-6, and that was all the scoring the Indians could muster.

The Potter-Dix offense feasted for the rest of the contest, with all of their players seeing action and many scoring. Luke Kasten finished with 144 yards on six carries, and scored four touchdowns. Jaxen Buettenback finished with 105 yards on four carries with two touchdowns and sophomore Logan Hottell had nine carries for 116 yards and two touchdowns. Freshman Dylan Tabor had an outstanding day on defense with two interceptions. Potter-Dix next hosts Crawford on Friday at Combs Field.