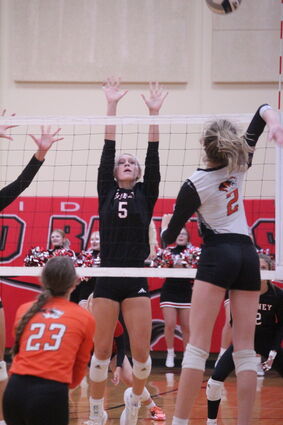 Sidney's Lady Raider Volleyball team looked strong this week as they opened their 2022 season with two big wins against visiting from Colorado. On Thursday, the Lady Raiders hosted Sterling for their first match of the year. The highly rated Lady Tigers came into the match with a 2-and-0 record, beating Highland and Fort Morgan in earlier action.

Head Coach Julie Smith clearly has her team ready for another State Tournament run, and after Sterling opened an early lead, the Lady Raiders stormed back in the first set, led by powerful serves by junior Karsyn Leeling and kills by senior Gabrielle Fortner and junior Chloe Ahrens. Sidney pulled away in the first set for a 25-to-15 victory, despite numerous serving and hitting errors by the Lady Raiders.

Sidney opened a lead in the second set, but again service errors kept the Lady Tigers in the match for a time. Sidney was again able to pull away and take the set by a final score of 25-to-18. The third set was close, but with Sidney up 11-to-10, the Lady Raiders went on a 7-to-0 run to extend their lead to 18-to-11. Sidney finished off the third set with a kill by Ahrens for a 25-to-15 victory, and a 3-to-0 sweep of the Lady Tigers. Sidney outhit Sterling 31-to-10, and despite 15 service errors, the Lady Raiders were in control of the match the entire way. Karysn Leeling led with 11 kills, and senior Reese Riddle had 27 assists.

On Saturday afternoon the Lady Raiders were in action again at home, hosting Yuma. Yuma came into the match with a 1-and-2 record, and after Yuma took an early lead in the first set, the Lady Raiders tied the set at 3-to-3 then took over, pulling away with a 25-to-14 first set victory. The second set had the teams playing closer until Sidney again pulled away and finished off Yuma in the second set 25-to-16. The third set had Sidney take a big lead early, but then sloppy play and a series of errors got the Yuma team back into striking distance at

10-to-7. But Sidney Head Coach Julie Smith called a time out and got her squad settled down. Sidney then turned the offense on and built a big lead. Again, Yuma came back to narrow the set to a one point Sidney lead at 23-to-22. But the Lady Raiders again settled down and took the third set on an ace serve by senior Rheagan Stanley for the 25-to-22 set win and a 3-to-0 sweep. Leeling again led with 14 kills, while Gabrielle Fortner had six kills, four blocks and three ace serves in the victory. Sidney next travels on Thursday to Ogallala for a triangular with Ogallala and North Platte.