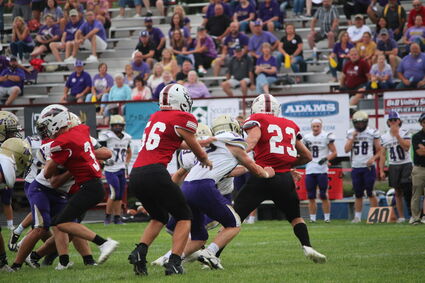 Sidney kicked off its 2022 football season Friday night, hosting the Holdrege Dusters at Weymouth Field. New Sidney Head Coach Ryan Smith had his squad prepared for the run-first Dusters led by senior quarterback Jackson Hinrichs, and the Red Raiders were fired up at kick-off, ready for a new season and looking to make a statement against Holdrege. But the Dusters’ offense was too much for the Sidney defense, and although the Red Raiders were able to move the ball and score, Holdrege had just too much firepower for the Sidney defense to contain.

Holdrege started with the ball and immediately established their running attack, with Hinrichs and senior running back Jaydan Janssen ripping off big runs. Holdrege moved down into scoring position, when on third down and goal at the two yard line, Hinrichs tried to draw the defense offsides, but one of the Holdrege lineman moved, pushing the Dusters back to the seven yard line. Sidney could not capitalize, and Hinrichs found senior Cole Guthrie in the corner of the end zone for a touchdown. A successful kick made the score 7-to-0. Sidney struck right back when junior Luke Holly, a state-qualifier in track last year, received the kick at about the Sidney five yard line and tore up the right side of the field for touchdown, and a successful Isak Doty point-after kick tied the score at 7-to-7.

Holdrege started their next drive on the 26 yard line, and again were able to run the ball for first downs and connect with passes to keep the Raiders defense off-balance. The Dusters again drove down the field, and Janssen capped the drive with a nine-yard touchdown run. Sidney disrupted the extra point attempt and Holdrege took a 13-to-7 lead. Sidney started their next drive on their own 27 yard line. Sidney was able to pick up a first down, and nearing mid-field, junior Isak Doty attempted a pass. He couldn’t find an open receiver and was flushed from the pocket, and tucked the ball in and took off down the left sideline, beating the Duster’s defense down the field and to the end zone. But the touchdown was called back on an offensive holding penalty, which would be the only penalty the Raiders would have all game, but it could not have been more costly. Sidney could not recover, and was forced to punt on fourth-and-fifteen.

Holdrege started their next drive on their own 37, and again were able to move the ball, scoring another touchdown on a long Hinrichs gallop to paydirt. Holdrege took a 20-to-7 lead at the end of the first quarter. Sidney started their drive near their thirty yard line, and on the first play from scrimmage, Luke Holly rushed up the middle then cut to the right and was able to outrun the Duster’s defense again and scored a touchdown. Sidney narrowed the lead to 20-to-14 and needed its defense to come up with a stop. Sidney held Holdrege on a third and two play, but the Dusters were called for holding, then followed the next play with a false start to put them in a third and seventeen situation. Although the Raider defense was able to make some good tackles and stop runners for a loss occasionally, they could not stop the Dusters when it counted. On third and seventeen, Hinrichs found a receiver open and completed a pass for seventeen and a half yards, and kept the drive going. Sidney had their first big break when a completed pass down to the Sidney seventeen yard line was fumbled, and the Raiders came up with the ball. Sidney then moved the ball to mid-field on big runs by Doty and Holly, but were again forced to punt. On the next Holdrege drive, the Sidney defense stiffened, and forced Holdrege to punt. On the following possession, Doty had a pass intercepted by Cole Guthrie, and the Dusters were again able to move the ball and score, this time on another long run by Janssen. That ended the scoring for the first half, with the visitors holding a 27-to-14 advantage.

Sidney was able to move the ball on offense and were only down by two scores, and made a statement in the third quarter when they were able to drive down the field, going 78 yards on 8 plays capped by a one-yard touchdown pass to narrow the lead. But the Dusters were again able to drive down the field and score, and the Raiders were unable to match them. The Dusters and the Raiders each put up thirteen points in the third quarter, but the Raiders were unable to score in the fourth, and Holdrege added another touchdown to end the game in a 47-to-27 defeat for the Red Raiders. It was a game of big plays for both sides, but the Sidney team just could not keep up with the scoring pace of the Dusters. Hinrichs completed six of nine passes for 89 yards and a touchdown and rushed 21 times for 258 yards and three touchdowns. Janssen carried fourteen times for 183 yards and two touchdowns.

Sidney’s offense looked impressive, with the ability to run the ball with tough and speedy backs, and Doty looked good throwing the ball to his receivers who were more sure-handed than during last year’s campaign. Although the Raiders came up on the wrong side of the score, it seemed a good showing for the first game with a new Head Coach. The Raiders need to shore up the defense and use their speed to contain the breakout runners they will encounter during the season. If they can continue to move the ball on offense and exploit their speed, look for Sidney to get on the winning track soon and be competitive in the C1 District. Sidney next hosts a strong Chase County team on Friday at Weymouth Field. The Longhorns won their opening game against Alliance, 35-to-8.