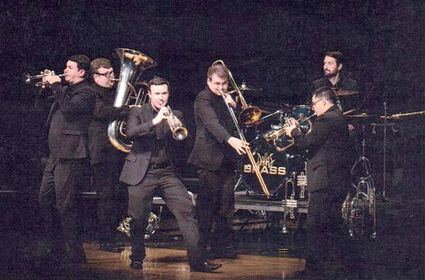 Dallas Brass last played in Sidney in 2014. Tickets for this concert are $13 for adults, $7 for seniors $5 for students (including Western Nebraska Community College) and children under 5 are free. Tickets will be available at the door.

This group's unique blend of brass instruments with a full complement of drums and percussion will be featured in “American Musical Journey,” a program that includes classical masterpieces, Dixieland, swing, Broadway, Hollywood and patriotic music.

Michael Levine founded the Dallas Brass in 1983 and played trombone with the group until 2015. He continues to serve as the ensemble's Master of Ceremonies and Artistic Director. Joining him on stage will be Brian Neal on trumpet. He is the director of instrumental studies and professor of trumpet at Miami Dade College. DJ Barraclough, also on trumpet, has performed extensively, including stints with Mannheim Steamroller and the Lawrence Welk Orchestra. When not performing, he lives in southern Utah where he is a band instrument repair technician and lesson studio teacher.

Paul Carlson on tuba is also an assistant professor of tuba and euphonium at Grand Valley State University in Grand Rapids, Michigan. Craig Hill on percussion has performed extensively on

Broadway, at Tokyo Disneyland and with Grand World Voyages Cruise Lines. Currently residing in Minneapolis/St. Paul, he teaches music and is the creative force behind the “Craig Hill Presents” concert series.

In addition to their solo engagements, the Dallas Brass appears with symphony orchestras nationwide, including the Cincinnati Pops, the New York Pops and the Philly Pops. They have performed at Carnegie Hall, the John F. Kennedy Center in Washington, D.C.L, and have toured overseas in Europe and the Far East.

The Dallas Brass has shared the stage with the late Bob Hope, has performed for Presidents Gerald Ford and George H.W. Bush, has appeared on the CBS “Early Show,” and their music has been used on the television show “The Young & The Restless.” The ensemble has also released seven recordings.

The Dallas Brass is dedicated to working with young musicians. They have published two books of music for middle and high school students and played a major role in launching Harmony Bridge — a community outreach program for student musicians. In addition, almost every public performance includes an invitation for students to join them on stage for a selection during the Dallas Brass concert. Over the years, more than 250,000 students have performed with Dallas Brass.

While in Sidney, Dallas Brass will work with music students from several area high schools at an afternoon workshop, then invite these students on stage to perform a number with the ensemble during the concert.