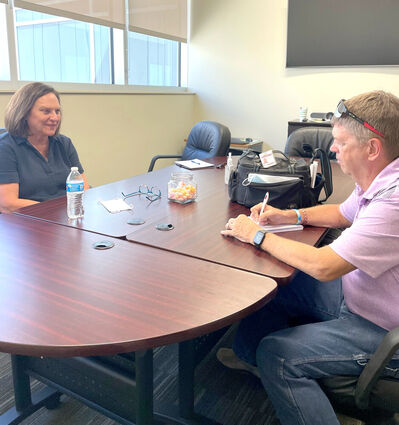 After the meeting, she took time to meet with the press.

Some of the major topics she has encountered on her tour are housing, the impact of inflation and jobs.

She said in her stop in Kimball, officials explained their housing project. She said the Air Force plan to update the ICBM (Intercontinental Ballistic Missile system) will bring workers in in phases, six weeks at a time. She also said the planned expansion of Clean Harbors near Kimball could benefit communities regionally.

She was asked about the apparent disparity between the number of workers and available jobs with the number of companies having job openings they can't fill. She said some workers are seeking flexibility, and others have found working at home as an option.

“A lot of people were able to work from home (during COVID),” she said.

She was asked about the impact of the proposed student loan forgiveness plan as presented by President Biden. She said she stands against it because the President doesn't have the Constitutional authority to forgive student loans. She said the program, estimated to cost billions, will create “ever greater hardship.”

On Aug. 24, following President Biden's announcement of the student loan relief proposal, Fischer released a statement on the proposal.

“Yet another economically backwards policy from the Biden administration that unfairly pushes the burden of these loans onto all American taxpayers and further fuels the inflation fire,” she said.

Fischer said the proposal is an effort to secure votes.

“It's not just the multi-billion-dollar cost. These loans are not magically 'gone' — the debt is being transferred from those who borrowed it to current and future taxpayers.”

Sen. Fischer also talked about the importance of Sidney Regional Medical Center. She said it is important SRMC maintains its Critical Access status. Critical Access began as a means to bridge the gap in rural healthcare and has developed into a critical access hospital system with 1,328 facilities in 45 states, according to the National Library of Medicine.

She said the 340B program is a big asset to rural communities.

“It is beneficial to the hospital,” she said.

According to the American Hospital Association, the 340B Drug Pricing Program has provided financial help to hospitals serving vulnerable communities for more than 25 years. Section 340B of the Public Health Service Act requires pharmaceutical manufacturers participating in Medicaid to sell outpatient drugs at discounted prices to health care organizations that care for many uninsured and low-income patients. The American Hospital Association says “340B-eligible hospitals are the safety net for their communities. The 340B program allows these hospitals to further stretch their limited resources and provide additional benefits and services.”