Defensive Gem Gets Sidney The Win 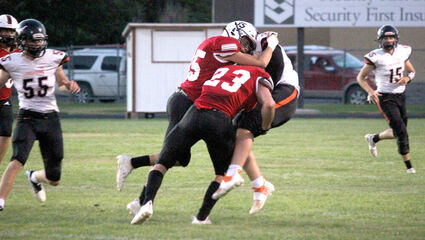 Sidney's Red Raider Football team got on the winning side of the ledger Friday night with a decisive 33-to-14 victory over the visiting Chase County Longhorns at Weymouth Field. It was Senior night, and the big crowd not only got to honor the senior members of the sports and activities teams, but also got to celebrate a big win for the Red Raiders.

Although the Red Raiders were able to move the ball and score last week against Holdrege, the Sidney defense was unable to stop the Longhorns when it mattered. What a difference a week makes. According to Head Coach Ryan Smith, the Red Raiders had a great week of practice, especially on defense, but the question remained whether or not those good practices would translate into improved game-time performances. The verdict is in, and it did.

The Longhorns rely on their running game, led by 5'9” 200lb running back Dawson Mollendor. Mollendor is a big and fast back, with a punishing running style that wears down opposing defenses. But the Red Raiders shut him down early, with their smaller players getting low and delivering punishing hits and gang-tackling which kept the Longhorns from converting first downs and driving the ball. The Red Raiders kept Mollendor under 100 yards for the night, a big accomplishment against the star running back.

Sidney kicked off to start the game, and after Chase County was able to convert one first down, the Red Raider defense rose up and forced a punt. With Sidney starting deep in their own territory, the Longhorns keyed on Sidney running back Luke Holly, with his track-star speed. But the Raiders were able to use misdirection effectively, and junior quarterback Isak Doty broke a big 60 yard run for a touchdown, and after missing the extra point, were up 6-to-0.

Chase County fumbled the ensuing kick off, but recovered and were forced to start their drive deep in their own territory. The Sidney defense again stuffed the Longhorn attack, forcing a punt that gave Sidney good field position. A few plays later, Doty found Alec Doty in the end zone and completed the pass for a touchdown, and after converting the extra point, the Red Raiders were up 13-to-0.

Sidney again shut down the Longhorn offense, with junior Cole Hanley breaking through the line and disrupting the Chase County offense, something he did with regularity for the entire game. After a turnover on downs, Doty again broke a big run into Chase County territory. After a few runs by Luke Holly to bring the Raiders close to the end zone, Sidney fumbled and gave the ball back to Chase County. Longhorn senior quarterback Carter Liebbrandt found sophomore Luis Co for a long completion to mid-field, but on the next play Isak Doty intercepted a Liebbrandt pass to stop the drive. Sidney went into the halftime break up 20-to-0.

Sidney received the ball to start the second half, and after Luke Holly returned the ball to the Sidney to the 32, Isak Doty again broke out a big run down the sideline, going 68 yards for a touchdown. Doty dodged Longhorns and stiff-armed tackling attempts the whole way down, and after the converted extra point, Sidney had a dominating 27-to-0 lead. Sidney scored again on a short passe to Kole Kaiser, who caught the ball and headed for the end zone. At the five yard line Chase County senior Kade Anderson tried to tackle Kaiser, but Kaiser juked Anderson badly, and escaped the tackle attempt to score a touchdown. At 33-to-0, the game was effectively over.

The Sidney defense was aggressive and relentless, with Cole Hanley in the face of quarterback Liebbrandt all night, and big hits delivered by Reid Fiscus and Conner Hurt. The defense was disciplined and stayed in their lanes, preventing big gains by the Longhorns most of the night. The offense executed well, with Isak Doty gaining over 200 yards on the ground and Luke Holly tallying over one hundred yards. The Raiders had some trouble with penalties and some turnovers, but if Head Coach Ryan Smith works on those aspects during this week's practices like he did on defense last week, look for Sidney to correct those mistakes in short order.