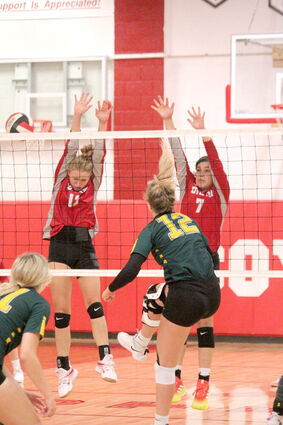 After an 11-and-18 record last season, the Potter-Dix Lady Coyotes have improved their play tremendously under second-year head Coach Keri Mendoza.

Stocked with experienced juniors and seniors, the Lady Coyotes have cut down on mistakes, played within system and have used strong net play to go undefeated to start the season.

The Lady Coyotes had a busy week with six matches, starting with a triangular at home on Thursday against Kimball and Mitchell. Kimball's height and experience were no match for the Lady Coyote's aggressive style, and the Lady Longhorns fell quickly in the first set 25-to-10. Kimball regrouped and battled back in the second set, but could not overcome the Potter-Dix squad and fell 25-to-22. Potter-Dix junior Madison Williamson had five kills in the victory, and senior Kallie Crossman had seven assists. Next up was a match against Mitchell, who had just earned their first win of the season against Kimball.

The Lady Tiger's winning streak was short-lived, as the Potter-Dix girls swept away Mitchell, 25-to-16 and 25-to-16 for the 2-to-0 match victory. Senior Lily Tabor led the offense for Potter-Dix with six kills, and the Lady Coyote's outstanding setter Kallie Crossman led with 13 assists in the win.

On Friday, the Lady Coyotes hosted the Hay Springs Lady Hawks, and the first set started close but was then opened up by two long service runs, the first by Lily Tabor and then followed up by senior Jayden Shoemaker to give Potter-Dix a 25-to-14 first set victory. The second set started with a Potter-Dix 6-to-0 run until Hay Springs regrouped and battled back to 7-to-6. Potter-Dix took a time out to regain their focus, and then pulled ahead. But Hay Springs wouldn't go away easily and kept battling until the Potter-Dix squad was able to put together a string of points at the end of the set and win 25-to-22. In the final set, Hay Springs ramped up the tempo and aggressiveness and opened an early lead. But Potter-Dix fought back and knocked Hay Springs out of rhythm. The teams battled for points until at 18-to-18, Potter-Dix went on a run powered by the outstanding serving of junior Jacina Wilber, and pulled away for a 25-to-19 set victory and 3-to-0 match win. Although Potter-Dix was out-hit 26-to-23, Williamson again led Potter-Dix with seven kills and three service aces, while Crossman had 15 assists in the victory.

On Saturday the Lady Coyotes traveled to Bridgeport for a triangular, and first up was match against the Cody-Kilgore Cowgirls. The Cowgirls got an early jump on the Lady Coyotes, and took the first set 25-to-23, only the Lady Coyote's third lost set of the year. But Potter-Dix made their adjustments and shook off the first set loss, and roared back with a 25-to-16 win in the second set and then finished off the Cowgirls 25-to-16 for the the 2-to-1 match victory. Tabor again led the Lady Coyotes with six kills while Crossman had 13 assists in the win. Williamson added six aces to continue her outstanding serving. Potter-Dix was able to get many of their bench players court time in their next match against Banner County and came away with a solid 2-to-0 win, 25-to-12 and 25-to-14. Sophomore Crystal Dhooge led the offense with five kills and sophomore Jaclyn Worth had seven assists in the victory. The Lady Raiders finally matched up with Bridgeport, and the Lady Bulldogs gave the Potter-Dix squad a tough match. Potter-Dix was able to keep in system and stay focused, and were able to put away Bridgeport in the first set, 25-to-21. The second set was an even tougher battle for the Lady Coyotes, requiring extra points to finally put away the Lady Bulldogs, 26-to-24 for the 2-to-0 match victory. Williamson again led the offense with five kills, Crossman again was outstanding with 14 assists and senior Tyenne Berner had six service aces in the victory.

The Lady Coyotes next travel to Harrison on Friday for a match against Sioux County.