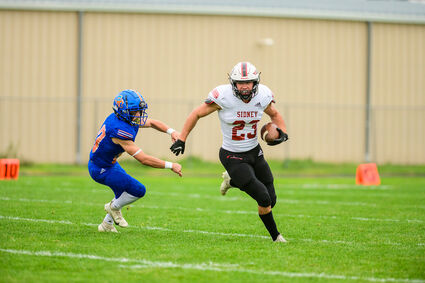 Sidney’s Red Raider Football team played an outstanding second half and capitalized on Gordon-Rushville miscues to come from behind for a 34-to-17 victory Friday night in Gordon. The win moves Sidney to 2-and-1 on the year, and has shown the Red Raiders to be a much improved team from the past few seasons.

Gordon-Rushville looked sharp in the first half of the game, with both their offensive and defensive lines imposing their will on their Sidney counterparts. The Mustangs opened the game with a 14 play drive, but were forced to settle for a 31 yard field goal from kicker Michael Perez to take an early 3-to-0 lead. Sidney’s best turn on offense in the first half came on the ensuing drive, with the Red Raiders marching 71 yards and ending with a 1 yard touchdown run by junior quarterback Isak Doty, and after a missed point after attempt, the Sidney squad held a 6-to-3 lead.

Again, the Mustangs drove the field, taking over eight minutes of time off the clock, but again settling for a field goal attempt. This time, however, Perez’s kick was wide, keeping the score in Sidney’s favor at 6-to-3. After Sidney was shut down on offense and punted, the Mustangs struck quickly when quarterback Carter Anderson connected with Jace Freeman for a 50 yard touchdown pass to put the Mustangs back in the lead at 10-to-6.

Sidney quarterback Isak Doty was intercepted on Sidney’s next drive, and a short field gave the Mustangs another score with a 1 yard Carter Anderson touchdown run. The Mustangs went into halftime up 17-to-6 and dominating in time of possession, but the second half would be a completely different story for both teams.

Sidney came out of the break fired up and received the ball first, and the Sidney offense took over the game. Sidney marched down the field and scored on a nine yard run by Doty. The Sidney defense swarmed and shut down the Mustang offense, forcing two punts, two fumbles and two interceptions in the second half. Sidney scored twice more on runs by junior Luke Holley, and also scored on an interception and touchdown return by sophomore Reid Fiscus, his first of two interceptions in the second half.

The Mustangs had one drive of six plays in the second half, and their only drive that threatened to score was stopped by a Sidney fumble recovery. Sidney’s defense held in the waning minutes of the fourth quarter and put away the Mustangs for good, ending the game in a 34-to-17 victory for the Red Raiders.

Junior Luke Holly was held to just 33 yards rushing in the first half, but exploded for 148 yards in the second half to tally 181 yards rushing on 21 carries with two touchdowns on the night. Quarterback Isak Doty, who rushed for 237 yards in last week’s victory over Chase County, was limited to just 21 yards on seven attempts, but was 7 for 13 for 102 yards passing with an interception. Senior Austin Roelle hauled in three passes for 61 yards in the victory. Senior Boone Hicks was all over the field on defense, recording 13 tackles on the night.

After the game, Head Coach Ryan Smith commented on the turnaround from the first half to the second half. He said, “In the first half, we played probably our worst football of the year. It was like we didn’t even come off the bus. At halftime we didn’t make any big adjustments, but came out fired up and prepared. The offensive line started to push them around, and the 1 to 3 yard runs Luke Holley had in the first half turned into 4 to 6 yard runs in the second half. The boys did a great job of hanging in and turning up the intensity when they had to.”

On Friday’s opponent, Mitchell, Smith said, “They’re a very good team; big and fast and they have a very good coach. This game will be a big challenge for us.” Sidney matches up against the 3-and-0 Tigers in Mitchell on Friday, with kick off scheduled for 7 p.m.