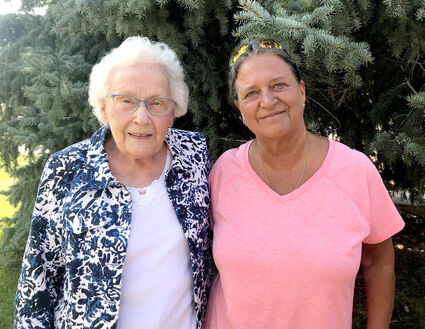 This year’s 2022 For Peetz Sake Day Parade Marshalls are Milly (Ross) Westphalen and Maria (Puelzl) Roberts. Both have had professional careers teaching children and both have found what our Peetz community has to offer.

Milly was raised and graduated in the Peetz community. She enrolled at Colorado State in Greeley in 1953 and earned her bachelor’s degree. Her first teaching job was in Henderson, NV. During one of her summer vacations at Peetz, she met Vernon Westphalen from Lorenzo. She and Vernon were married in Las Vegas in 1959. They lived in Peetz while Vernon farmed. Later they moved to Denver where they raised three children, Tim, Todd and Suzanne.

Milly continued with her teaching and went on to earn her Masters in Greeley at the same college but a different name (UNC). When she renewed her teaching certificate she was certified in special education and administration. Besides teaching she found time being Cookie Mother for Suzanne’s girl scout troop. After 30 years of teaching, Milly retired and she and Vernon moved back to Peetz in 1994.

She has been part of the Peetz community by being a member of the United Methodist Church, helping with Meet and Eat, and serving on the Council on Aging. She has also served on the Colorado Commission of Teacher Education and Certification. Her son Tim and his wife Kate live at Sound Beach, New York. Todd passed away in 2019. Suzanne and her husband, Fred, live in Broomfield, CO. Milly says, “Peetz has always been home and upon returning to Peetz in 1994, we were welcomed as if we had never left. Thank you for this honor of being a “For Peetz Sake Parade Marshall.””

Maria grew up in New York. She earned her undergraduate degree at Loretto Heights College in Denver, and her Masters in literature and writing from the Breadloaf School of English, Middlebury, Vermont She came to Peetz in 1977 and began her teaching career thinking she would probably be here a couple years before going on to a bigger school. Little did she know at that time that she would be marrying a local farmer-rancher (Ras Roberts) in 1980, raise three boys, and continue teaching in Peetz until 2013. During her tenure, Peetz students consistently scored high on state exams and in 2011 were #1 in the state in growth in high school reading and writing.

While at Peetz, Maria taught dual enrollment classes for NJC and continues working there as an Adjunct Professor. Her son, Chris, and wife, Ashley, live at Peetz and their four children are attending Peetz school. Her son, Nick, passed away in September of 2013. Sam and his wife, Sam, live in Sterling and have two girls.

Maria would like to say, “I’ve always been so proud of Peetz kids and the hard work and effort they showed in my classroom. They were my joy and inspiration for over 35 years. My career at Peetz was rewarding and forever precious. I don’t for a single second take for granted the love and support I received from my students, community and colleagues during the saddest times in my life. You held me up, prayed for me and my boys and comforted us immeasurably. Thank You.”