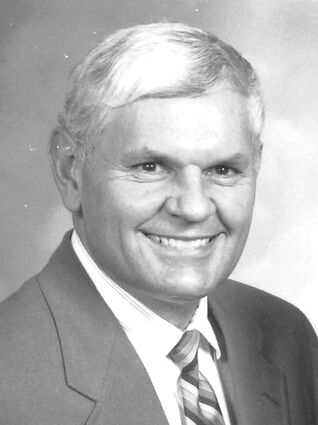 Gerold was born on April 4, 1938 in Holyoke, CO to Dwight and Helen (Greer) Radcliffe. He grew up on a farm near Lamar, NE and attended District #4 rural school before entering High School at Imperial, NE, graduating in 1956. He attended Hasting College and receive is BA Degree in 1961. He finished his formal education at what was then Kearney State College with an MA Degree in 1969.

On December 27, 1959 he was united in marriage to his high school sweetheart, Mona K. Bauerle of Imperial. To this marriage was born a daughter, Renae and a son, Burke.

Gerold belonged to the United Methodist Church for over 60 years and served on various committees in churches in Chappell, Sidney, and here in Ogallala, as well as being a member of the Elks, Ogallala Garden Club, RSVP and Kiwanis.

He was very interest in community service and was a member of Kiwanis International for over 45 years and loved involvement in youth through the teammates program and the Key Club.

Sports played a big part in his life, not only through participating in high school and college, but by coaching at Roseland, Lexington, and Chappell all in Nebraska. He enjoyed attending about any sporting event and he and his “traveling buddies” attended every away football venue while NU was in the Big 12. He attended the college baseball World Series in Omaha for 37 consecutive years. This group also enjoyed many baseball games and track meets at NU as well. He also loved playing golf, as well as playing pool at the Senior Center in Ogallala.

In 1969, he entered the life insurance business as an independent agent. In later years, he also worked with investments and came to Ogallala in 1993 as the Investment Representative at the Investment center located in what was then the First National Bank and worked there until he retired in 2001.

While in Sidney, he was very active in many Kiwanis projects, officiated high school sports for over 20 years and served on the Sidney Public School Board of Education for 10 years.

He was preceded in death by his parents.

Services will be Saturday, September 24th, 2022 at 10:30 a.m. at the First United Methodist Church in Ogallala. Reverend Curt Magelky will be officiating.

The family as chosen cremation. Inurnment will be at Mount Hope Cemetery in Imperial, NE at a later date.

Memorials have been suggested to the Champion Community Center, the Champion Historical Society, or the First United Methodist Church in Ogallala.

Online condolences may be shared at http://www.drauckerfh.com by clicking the share a memory button. Services will be live streamed at www. drauckerfh.com and http://www.methodistchurchogallala.com.

Draucker Funeral Home of Ogallala has been entrusted with arrangements.