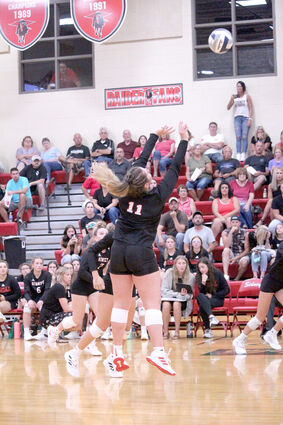 Sidney's Lady Raider Volleyball team spent the week on the road, and showed they didn't need a home court advantage to continue their strong play. On Tuesday, the Lady Raiders faced the Chadron Lady Cardinals and the Bridgeport Lady Bulldogs, and swept both matches in straight sets.

Against Chadron, the teams battled hard in the first set but Sidney was able to outlast the Chadron squad, taking the first set 25-to-20. Chadron fought hard in the second set, driving the set to extra points, but the Sidney girls were able to outlast Chadron and score the final series of points for the 28-to-26 set victory and 2-to-0 match victory.

Sophomore Kayla Westby led the offense with nine kills in the match, senior Rheagan Stanley had 14 digs, and senior Reese Riddle had 28 assists in the win.

Next up was Bridgeport, and the Lady Raiders had an easier time with the Lady Bulldogs, taking both sets 25-to-14 for the 2-to-0 match victory. Junior Karsyn Leeling led the offense with seven kills and Riddle had 17 assists in the win.

Alliance would not go away easily as the teams battled to extra points in the fourth set, with Sidney outlasting Alliance 27-to-25. Leeling again led the offense with 20 kills, while Westby had 14. Stanley had 20 digs while Riddle had an outstanding match setting, with 39 assists on the night.

Sidney was scheduled to host Chase County on Tuesday.