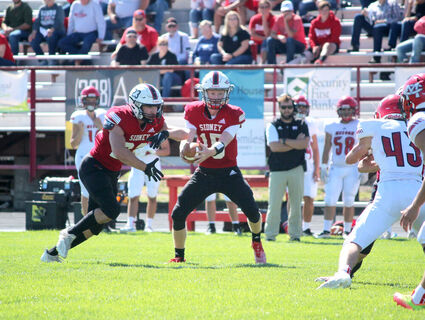 The loss moves Sidney to 2-and-3 on the season.

Like last week’s opponent Mitchell, the Bison came into the contest undefeated and used their powerful lines to dominate in the trenches and dictate the tempo of the game. Although the contest was close in the first quarter, the Bison capitalized on a series of Red Raider miscues to pull away and then seal the game in the third quarter.

Sidney received the ball and started on their own 20, but were unable to convert and punted on fourth down. Senior Isak Doty’s punt was affected by the persistent tricky wind, and the Bison started their first drive at midfield. The McCook offense had little trouble marching down the field against the Raider defense, and scored their first touchdown to take a 7-to-0 lead. Another touchback started Sidney at the 20 yard line, but some good runs by Doty and junior running back Luke Holly moved the ball, and a long pass down the sideline was corralled by senior Austin Roelle to get Sidney into scoring position. Sidney pushed the ball closer, and on fourth down and about one half of a yard, Doty faked to Holly up the middle and burst through the line himself, breaking the plane of the goal line and getting Sidney even at 7-to-7.

After the score, the first Sidney miscue that changed the game happened when McCook junior Brett Fraker returned Sidney’s kick off 44 yards to the Sidney 36 yard line. Five plays later, the Bison scored and took a lead they would not surrender. In the second quarter, the Red Raiders started to drive, but Isak Doty attempted a pass that slipped out of his hand and was caught in the air by McCook junior Mitchel Cole. Cole returned the ball to the Sidney 26, and the Bison cashed in with another touchdown two plays later, and took a 21-to-7 lead. Sidney had another chance to score late in the half, but turned the ball over on downs, this time deep in Bison territory. The Raiders had another opportunity late in the first half, but again turned the ball over on downs on the Bison 14 yard line, and went into the halftime break down 21-to-7.

McCook put Sidney away in the third quarter, first on a 48 yard drive for a touchdown followed by a 70 yard drive for another touchdown to take a 35-to-7 lead. In the fourth quarter, Sidney was able to score on a Doty nine yard touchdown pass to Luke Holly, but that was all the scoring the Red Raiders had for the contest. McCook tacked on a 25 yard field goal by junior Patrick Gross to end the game with a final score of 38-to-13.

Doty led the Sidney rushing attack with 45 yards on 12 carries, followed by Luke Holly with 41 yards on 14 carries. Doty went 12-for-25 passing for 179 yards and one touchdown. Sidney falls to 2-and-3 on the year and next goes on the road to match up against 3-and-2 Chadron Friday evening.