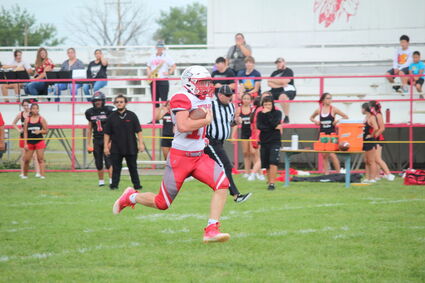 Potter-Dix’s Coyote Football team continued their undefeated season on Friday night, traveling to Chappell and shutting out the struggling Creek Valley Storm team in a lopsided 79-to-0 contest. The win moves the Coyotes to 6-and-0 on the year, while Creek Valley remains winless at 0-and-7.

As usual, Potter-Dix opened fast and put up 34 points in the first quarter while shutting down the Creek Valley offense completely. The Coyotes added another 26 points in the second half to initiate the running clock and take a 60-to-0 lead into the halftime break.

Playing with many substitutes, the Potter-Dix offense continued to perform well, adding another 13 points in the third quarter and one last touchdown for six points in the fourth quarter to complete the 79-to-0 shutout. It was the third time the Storm had been shut out in the season.

Potter-Dix junior quarterback Brayden Kasten went 6-for-6 in the air for 63 yards and two touchdowns, while senior Luke Kasten had three carries for 51 yards and three touchdowns. Luke Kasten also caught one pass for a touchdown, scoring every time he touched the ball.

Touchdowns were also scored by freshman Dylan Tabor and Kolby Labeau and junior Jaxson Buettenback. Sophomore Logan Hottell scored three touchdowns on six rushing attempts and senior Zach Rotert had a touchdown reception and also scored another touchdown on an interception return. The Coyotes racked up 345 yards of offense in the victory.

Potter-Dix next hosts 5-and-1 Garden County at Combs Field on Friday for an afternoon game; kick off is schedule for 2 p.m. Creek Valley has a bye this week, then again tries for a win in their last game of the season as they travel to Garden County on Friday, October 21.