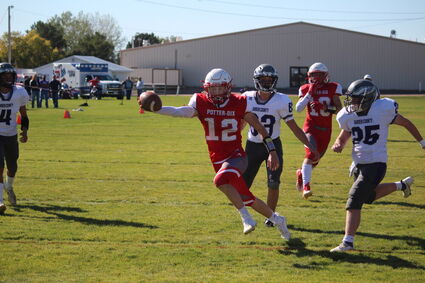 Potter-Dix's Coyote Football team continued their undefeated season Friday at Combs Field with a 55-to-8 beating of the visiting 5-and-1 Garden County Eagles. Potter-Dix continued their dominant play, with their fifth victory while keeping opponents scoring in the single-digits.

Garden County rested their hopes on their outstanding athlete, senior Johnny Vargas, but the Coyotes were able to contain the scoring threat, limiting Vargas to just 17 carries for 56 yards and one rushing touchdown in the game.

Again, no team that the Coyotes played in the regular season has been able to match up against Potter-Dix's high-scoring offense and punishing defense. Garden County looked to be a potential challenger with a 5-and-1 record coming into the contest, but again the Coyotes dominated from the start and put the game away early, coasting through the second half and using substitutes from the middle of the fourth quarter until the end of the game.

Senior Zach Rotert led the receivers with five catches for 71 yards. Junior Jaxson Buettenback was a force on defense with 10 tackles and four tackles for loss.

Potter-Dix had 408 yards of total offense while holding Garden County to just 111 total yards in the win. The Coyotes wrap up the regular season on Friday when they travel to Big Springs to take on the 3-and-4 South Platte Blue Knights.

Kickoff is scheduled for 7 p.m.