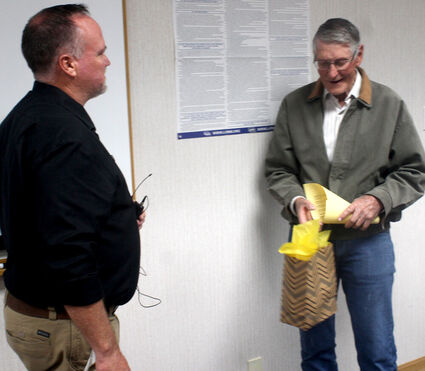 Sidney Mayor Roger Gallaway publicly commends Larry Fraas in the Oct. 25 city council meeting for his dedication in maintaining the downtown lights. Fraas is holding a gift presented to him by the City.

Larry Fraas has been instrumental in keeping Sidney's downtown area illuminated and inviting for residents and visitors alike, and has been honored by the Sidney City Council for his efforts. An idea that was presented at a Cheyenne County Chamber of Commerce meeting in 1997 to add roof-top lighting became a reality by December of that year due to the efforts of Fraas.

Fraas was committed to making the project a reality, showing up before and after work seven days a week to ensure the project was completed and correct. The result was a lit-up downtown skyline in time for Christmas of that...