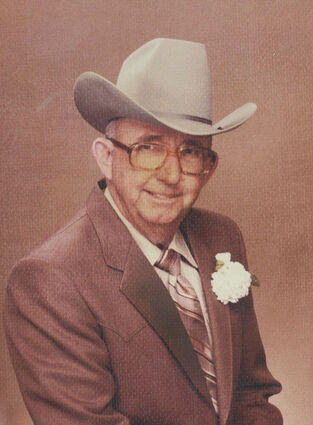 Friends may stop at the Gehrig-Stitt Chapel on Wednesday from 1-6:00 P.M. and leave condolences for the family.

You may view R.B.’s Book of Memories, leave condolences, photos and stories at http://www.gehrigstittchapel.com.

Life for R.B. began on February 11, 1929, when the country doctor delivered him on the family ranch near Knoxville, TX, to Rufus B. and Ethel (Nabors) Moore. R.B. was the youngest in the family having an older brother Andy and sisters Millie, Adabert and Libby. The US Army called and R.B. spent February of 1951 through February of 1953 serving his country at a base in Texas. The majority of his life was spent in Texas farming and ranching, showing the cutting horse Major King and others at competitions around Texas. R.B. tried his hand at different occupations over his early years including owner/operator truck driver before starting his own excavation business building ponds, terraces and waterways for the Soil Conservation District. R.B. and Lois married on December 23, 1984 making R.B. step-father to three, step grandpa to six and as the family has grown, step great grandpa to ten and step great great grandpa to five.

Saturday nights R.B. and Lois went to Geneva Dance Hall in Waco, TX to meet up with friends dancing the night away and this special time was too important to miss. In 2002, R.B. and Lois moved from Milford, TX to Sidney. They purchased farmland and built a new home starting a new chapter of life. Lois passed away in 2005 leaving a hole that affected R.B. until the end of his life. During the summer, he ran cattle on pasture checking them every day driving his gator with his blue heeler Boots riding shotgun and both of them enjoying every minute. R.B. discovered the Outlaw Cafe in Gurley, going every day that Shawn was open for lunch and conversation. It was unwise to get in his way when the clock struck 11:00 because he was headed north. He felt such friendship and sense of community in those four walls and to miss one day was unthinkable.

R.B. was proceeded in death by his wife Lois, step daughter Lisa and her husband Erv Cozad, son Trey, and R.B.’s entire family.