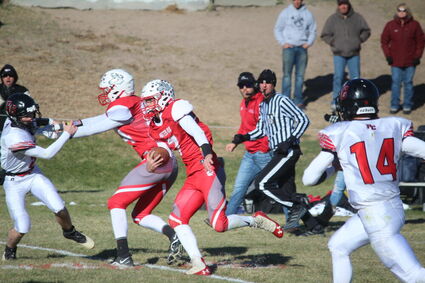 Potter-Dix senior Luke Kasten breaks through the defense and runs for a touchdown during the Coyotes' loss to Pawnee City on Friday in Potter.

Potter-Dix's undefeated Coyote Football team hosted the 7-and-2 Pawnee Indians for the quarter-finals of the D6 NSAA playoffs at Combs Field in Potter Friday, and were dealt a loss that ended their season and hopes for a D6 State Title.

After a coating of snow covered the Cheyenne County area Thursday night, a crew from M&S Drilling in Potter came out in the morning and cleared the field of the remaining snow for the game. The field was in good condition, and although chilly at kick off time with a cloudless sky and bright sunshine, a stiff wind blew from west to east that created problems throwing the long ball for both teams. Although the Pawnee City team had a six and a half hour ride from eastern Nebraska, they brought a good-sized group of fans to cheer them on.

Potter-Dix received the ball to start the game, and after freshman Dylan Tabor returned the ball to about the Potter-Dix 20, the Coyotes had the wind at their backs, and attempted two long passes for their first plays of the drive. Both passes fluttered in the wind and fell incomplete. After the incompletions, the Coyotes' pivoted and pitched the ball to their most effective offensive weapon, senior Luke Kasten, and he was able to break free for a 20 yard run and a first down. A few plays later, junior quarter back Brayden Kasten threw a long pass that senior Alex Anton was able to pull down and was tackled at the two yard line. Luke Kasten then ran the ball through the line for a touchdown, followed by junior Brayden Kasten connecting on a pass to senior Zach Rotert for an extra point, and the Coyotes were up 7-to-0 early.

The Coyotes stuck with their strategy of kicking the ball short to prevent a touchdown return and perhaps recover the kick, but Pawnee City jumped on sophomore Dawsen Monheiser's kick and secured the ball on their own 39 yard line. On the Indians' first play from scrimmage, senior running back Andy Maloley was able to cut back and run the ball down the sideline for a touchdown, and after a kicked extra point was good, Pawnee City led 8-to-7. Pawnee City then kicked off deep to Potter-Dix, and their defense was able to stop the Coyote offense cold, forcing a rare punt on fourth down and 10. The punt had the wind behind it, and rolled all the way down to the Pawnee City 19 yard line. Potter-Dix's defense then flexed their muscles, forcing a punt that was grabbed by the wind and pushed back. The Coyotes then started on the Pawnee City 24 yard line.

After being stopped on the first two plays, on third down Brayden Kasten scrambled then found Alex Anton deep in the end zone and lofted a perfect pass that Anton grabbed and was able to keep in bounds for the touchdown. After a missed extra point attempt, the Coyotes led 13-to-8. After another short kick, Pawnee City took over and methodically drove down the field into scoring position. But a pass by junior Justin Pierce was intercepted on the goal line by Brayden Kasten, who returned the ball to around the Potter-Dix 20 yard line. Kasten suffered a cut on his throwing hand during the play, and he wore a bandage on the hand for the rest of the contest. On their first play, Luke Kasten again ran around the defense an up the sideline for a 60 yard touchdown, and after Dylan Tabor connected with junior Caden McConnell for an extra point pass, the Coyotes were up 20-to-8.

After the teams traded defensive stops, Pawnee City was able to drive the ball, using speedy running backs Maloley and junior Jett Farwell to gain big chunks of yardage, and cash in for a touchdown, a Successful extra point kick narrowed the Potter-Dix lead to 20-to-16 with nearly seven minutes left in the first half. Potter-Dix was then stymied on offense and gave the ball back to Pawnee City. The Indians then drove, but met resistance from the Coyote defense. On a fourth down and eight from their own 33 yard line, Pierce connected with Maloley for a touchdown pass, and a successful extra point kick gave Pawnee City a 24-to-20 lead with about two minutes left in the half.

That lead was short-lived, as Brayden Kasten connected with Luke Kasten for a 42 yard touchdown pass on their next drive, and with a successful extra point run, Potter-Dix pulled ahead at 27-to-24. However, Pawnee City quickly struck back, and with 10 seconds left scored again to take a 32-to-27 lead at the halftime break. At halftime, the Coyotes had already incurred six penalties against Pawnee City's one penalty for a false start. The Coyote defense also struggled against the two fast running the backs, Maloley and Farwell, and needed to adjust to stop the Pawnee City offense.

Pawnee City received the second half kick off, and the Potter-Dix defense needed a stop to not fall too far behind. The Indians came out late from the break and were penalized five yards for delay of game, and after a deep kickoff, started at their own eight yard line. The Pawnee City offense started to drive, and after a 39 yard pass from Pierce to Farwell, the Indians were again threatening to score. But the Coyote defense rose to the occasion, and Alex Anton was able to intercept a pass and give the ball back to Potter-Dix on their own 31 yard line. After two Luke Kasten runs for a total of ten yards, disaster struck when junior running back Jaxen Beuttenback ran the ball up the middle, was hit and fumbled the ball, giving the Indians great field position. A few plays later, Maloley broke open a 15 yard run for a touchdown, and after the extra point kick hit the upright, the visitors expanded their lead to 38-to-27.

Potter-Dix received the ball back on their own 15 yard line after a touchback, and were only able to gain six yards on their drive. On fourth and nine, Luke Kasten tried a pass to Caden McConnell, but the throw was incomplete, and the Coyotes took over with great field position. After first and second down runs gained nine yards, on third down Maloley ran the ball, broke three separate tackles, and scooted in 11 yards for a touchdown. After a successful extra point kick, the Coyotes were down 46-to-27 and time was starting to run out on their season.

Potter-Dix started deep in their territory after Tabor was unable to handle the kick off, but Luke Kasten again had an outstanding run, dodging and weaving Indian defenders 74 yards for a touchdown. A successful extra point pass drew the Coyotes closer at 46-to-34 with three minutes left in the third quarter. A short kick again gave Pawnee City good starting field position, and the Indians were able to overcome a holding penalty during the drive that ended with a 20 yard touchdown run by Farwell. The successful extra point kick gave the Indians a twenty point lead at 54-to-34. Potter-Dix again started their next drive deep in their own territory, and loaded up on runs by Brayden and Luke Kasten to drive the ball. The Coyotes made it to midfield as the third quarter expired, and continued to drive. On a third down run, Luke Kasten juked a defender and broke away for a 31 yard touchdown run, followed by a successful extra point pass to cut into the lead at 54-to-41.

Potter-Dix then tried an onside kick, which Pawnee City recovered. The Indians started to drive again, but a holding penalty stopped their drive and forced a punt on fourth down and 25. The wind caught the punt, and Potter-Dix started their drive near mid-field. Potter-Dix started to drive on the strength of runs by Luke Kasten. After converting on a fourth down try, the Coyotes continued their drive, but two incomplete passes and a short run put Potter-Dix in a fourth down and 10 yard situation at the Pawnee City 11 yard line. Luke Kasten attempted a pass but all of his receivers were covered, then tried to scramble for a first down but was stopped short and turned the ball over on downs with almost four minutes left to play. The Coyotes were put in a must-stop position, but the Indians were again able to run the ball and on third down, Farwell took a pitch, juked Brayden Kasten, and took off for a 71 yard touchdown run, and after the extra point kick was good, Pawnee City held a 62-to-41 lead with a little over two minutes left to play.

Potter-Dix did what they needed to do, and were able to score on a Luke Kasten 37 yard touchdown run on their next possession. They tried an extra point kick but freshman Landon Gasseling's try was no good, and the Coyotes' trailed 62-to-47. The Coyotes tried an onside kick but it did not go the required ten yards, and Pawnee City took over at mid-field. After two runs, the Indians knelt on the ball and ran out the clock, ending the Coyotes' season with a 62-to-47 loss.

Luke Kasten had another big game, rushing for 303 yards on 24 carries with four rushing touchdowns. He caught four passes for 83 yards and two touchdowns, and had nine total tackles, with two for losses. Brayden Kasten went 11-for-19 passing for 168 yards and two touchdowns, had six total tackles and an interception. Senior Zach Rotert had three receptions for 26 yards, and senior Alex Anton had three receptions for 66 yards and a touchdown in the loss. Pawnee City was led by senior Andy Maloley with 19 carries for 163 yards, and three touchdowns, and junior Jett Farwell with 11 carries for 135 yards and four touchdowns. Maloley also had a receiving touchdown and Farwell led the defense with 15 total tackles.

The Coyotes end their season with a 9-and-1 record, and a 4-and-0 District record. Although they will lose playmaking starters like Luke Kasten, Alex Anton and Zach Rotert to graduation, they have talented juniors and underclass players that will be able to step up and keep Potter-Dix at the top of the standings next season.