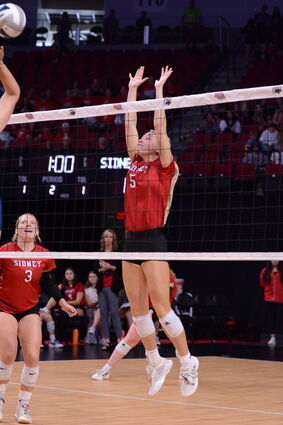 Sidney junior Chloe Ahrens goes up for a block during the Lady Raiders loss to Norris on November 2, in Lincoln. The Lady Raiders finished their season with a 28-and-7 record and a District Title.

Sidney's Lady Raider Volleyball team made the trip to Lincoln to compete in the Class B NSAA Volleyball Championships on Wednesday, November 2, as the number 6 seed. Their first round match was at 11 a.m. against the 28-and-7 Norris Lady Titans, seeded number 3.

It was the Lady Raiders' 14th time at the State Tournament, and Head Coach Julie Smith broke up the long drive to Lincoln by stopping at York for a practice in a different environment than the girls had ever played in, to help them prepare for Wednesday's first-round matchup. The Norris team presented a challenge as a very good team that often qualifies for the State Tournament, with powerful hitters and a tall front line. All of Norris' seven losses during the season were against teams that qualified for the State Tournament, so Sidney needed to play fast and error free volleyball while capitalizing on their improvement in hitting off the block if they were to get past the Norris team.

Sidney avoided a slow start to the match, quickly building up a 9-to-4 lead on senior Rheagan Stanley's ace serve, prompting an early timeout by Norris. After Sidney extended their lead to 11-to-5, Norris went on a run and quickly narrowed the lead and then went ahead, 13-to-12. Sidney tied the set at 13-to-13, but then Norris pulled away and took a 20-to-16 lead. The Lady Titans showed their experience and ability to come back, regardless of the score. Sidney tried to battle back but were only able to narrow the score to 25-to-20, and dropped the first set.

The second set started even better for the Lady Raiders, building a 9-to-2 lead before Norris called a time out. Sidney extended the lead to 11-to-3, but then Norris roared back with a run, chopping down the Sidney lead to 11-to-8 to prompt a Sidney time out. Norris then had three ace serves during the run, tied the set at 13-to-13, then poured it on to open a 20-to-14 lead. Sidney struggled with double hits and net violation errors, and the Lady Titans took advantage and finished off the Lady Raiders in the second set, 25-to-16.

With two blown leads in the first two sets, the Lady Raiders needed to compose themselves and stick to their strengths. But the Lady Raiders seemed off-balance, especially in the third set, struggling with service returns, double hits and net violations. The Lady Titans led throughout the set, but Sidney was able to put together a few good runs and narrow the lead to 17-to-15. A strong kill by sophomore Kayla Westby brought Sidney within a point at 18-to-17, but that was as close as the Sidney squad would get as the Norris team went on a run to close out the set, 25-to-19, and the match, 3-to-0.

Junior Karsyn Leeling led the offense with eight kills, followed by Kayla Westby with seven kills. Senior Reese Riddle had 24 assists, and senior Rheagan Stanley had 13 digs in the loss.

Sidney ends their season with a 28-and-7 record, a District Title, and a berth in the State Tournament, all impressive accomplishments. The difference between the Norris and Sidney teams, however, seemed to be the experience the Lady Titans gained playing tougher squads throughout the season.

Head Coach Julie Smith, although disappointed with the loss, was very happy about the overall performance of the girls this season. She said, "I feel that the overall experience will definitely translate to next year. The past three years, we have been faced with a challenging district final. As our athletes progress through our program, some of them have had the opportunity to experience those district finals firsthand. With this state experience being the first for many of them, I know that, overall, it was an eye opener for them. Having qualified this year will be something that they are not satisfied with, they want to get back to Lincoln and take the next step of winning the first round game."

On the officials seeming to call many more double hits and net violations than usual, she added, "Some officials see things differently than others. We teach that we control what we can control, and if an official calls a tighter game than we are used to, we go with it and make adjustments as needed."

She also had many positive things to say about the three seniors that will be moving on after graduation. She said, "When I met with them at the beginning of the summer, they had definite ideas and goals of how they wanted to improve and positively change the program. It was not always an easy process, but they continued to work hard; not only on their volleyball skills, but also their leadership skills. Many of our younger players look up to them and recognize and appreciate what type of team players they are. With Rheagan holding three school records (dig per match, digs in a season, career digs), Reese breaking the assists in one match school record, and Gabby continuing to increase her ability to be a threat at the net, we will definitely miss the skills they bring to the court. More importantly, we appreciate and love them for all they have done to make our Raider Volleyball program better."

The Lady Raiders will return next year, determined to take the next step and get past the first round of the tournament.