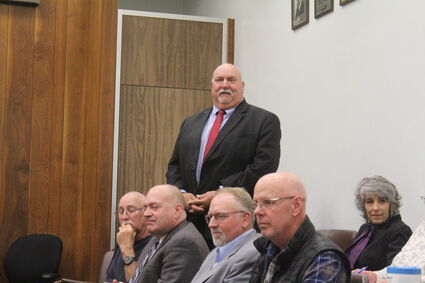 The November 21 meeting of the Cheyenne County Commissioners centered on the 2021-22 audit, and after a telephone meeting with an auditor, the audit was approved.

The telephone meeting with auditor Don Wilson was prompted when Commissioner Randy Miller questioned a particular line item in the audit where the budgeted federal funding amount was lower than the disbursement received, while state funding was more than budgeted. After contacting Wilson, the auditor explained that it was not unusual for federal funds to not be received as budgeted.

After approving monthly reports, the commissioners then approved a resolution to transfer $451,043 from the County General Fund 100 to the County Road & Bridge 300 Fund.

The meeting switched to Board of Equalization business, and approved a correction provided by Assessor Melody Keller for a 2019 Homestead for Allan Brauer in accordance with the Nebraska Assessment Division. The State is allowed to review assessments up to three years previous, and changed the homestead valuation from 100 percent to 60 percent. The board also approved a valuation change due to clerical error, which was made before any notification was sent to the property owner.

Additional business in the Commissioners meeting included updates by County Road Superintendent Douglas Hart concerning completion of mowing in Potter and the Huntsman/Gurley area, maintenance on washboard pavement at intersections and the six year highway plan, including the removal and maintenance of culverts near bridges and asphalt replacement. Commissioner Miller lauded Hart for saving the county "a ton of money" by using armor coating and thicker overlays on certain roads.

There were questions asked by citizens about providing the audit on the County website, which County Clerk Beth Fiegenschuh would research. Another question concerned the wording of road department budgeting, which seemed confusing and appeared to indicate an increase in funding, was clarified by Commissioner Miller. He explained the funding was not an increase, but just a transfer between funds.

"We are not adding anything to anything, because the highway department cannot levy taxes. The funds are disbursed as they are received," he said.

The Commissioners' Meeting adjourned for a short time to go over to the courthouse to address area high school students in attendance for County Government Day. In addition to the commissioners, Judge Derek Weimer addressed the students and greeted them, and they were also addressed by County Road Supervisor Hart, County Attorney Paul Schaub and District Court Clerk Debra Hume, among others.

The Sidney City Council also met last week, and approved a purchase for a new mini-van requested by Transportation Supervisor Kasey Kantor. The mini-van will get better gas mileage and be cheaper to maintain. Cost to the City of Sidney is estimated at $6,500, and would be financed by a combination of Federal, State and local funds.

The main business at the council meeting was to move forward with a Solar Project that was propose in December of 2021. The project involves contracting with Sandhills Energy to add solar power to the city's energy generation program. Since the proposal was discussed, the City's Electricity Superintendent, Mike Palmer, had been working on securing a Purchase Power Agreement with Sandhills Energy, LLC. The City is also seeking to secure and land-lease agreement for a solar panel field, with a 25 year term and two five year extension options.