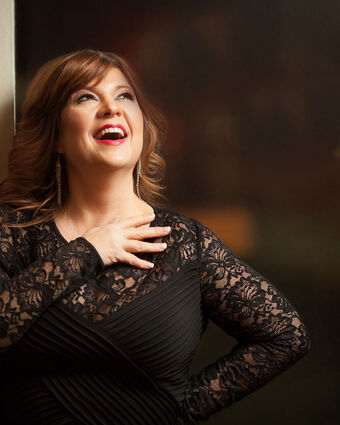 At 7 p.m. on Wednesday, December 21st, Mary Carrick will bring her dynamic vocals, charm and theatrical flair to the Sidney High School Performing Arts Center when she presents Silver Bells and Candy Canes, a nostalgic performance of festive favorites and familiar chestnuts, along with a few toe-tapping holiday gems to make spirits bright. Mary will be joined on stage by a talented acoustic trio comprised of J. Gawf (piano), Mark Haar (upright bass), and JB Ferguson (percussion). Together they form the Mary Carrick Collective, an exciting ensemble known for their tight, inspired arrangements.

Mary Carrick is a Midwest-based cabaret/concert/musical theater singer and recording artist who has been performing professionally for over twenty years. Her background in cabaret and theater has given her a gift for storytelling which draws the audience in from the very first note. Mary has toured extensively, and has performed with Opera Omaha, the Omaha Symphony and Rose Theater, at Holland Performing Arts Center, and at the Orpheum Theater. Known for her lush, expressive voice and engaging personality, Mary is the recipient of many professional accolades, including an Omaha Entertainment & Arts Award, and several Theater Arts Guild Awards.

Mary Carrick last appeared in Sidney in April of 2021 when she presented her Girl Singer: Celebrating the Women Who Wrote the Songs show. "I am looking forward to returning to Sidney, renewing acquaintances and making some new friends for the stage," declares Mary. "We are going to build memories and have a lot of fun together!"

Mary Carrick is a touring artist with the Nebraska arts Council and is appearing in Sidney as part of the High Plains Arts Council's 2022-23 season. Tickets for Silver Bells and Candy Canes are $13 for adults, $7 for seniors, $5 for students (including WNCC) and children under 5 are free. Tickets will be available at the door.