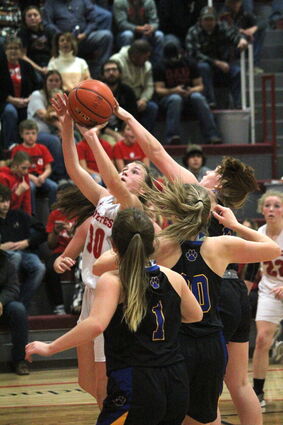 Potter-Dix freshman Micayla McConnell fights through traffic to go up for two against Morrill Friday night in Potter.

Potter-Dix's Lady Coyote Girls Basketball team opened their 2022-23 season with two losses, the first against a middling Morrill team and the second against top-tier opponent Bayard.

Friday afternoon kicked off the 2022-23 season for the Lady Coyotes as they hosted the Lady Lions of Morrill. The matchup started with the Lady Lions using their speed on defense to slow down the Lady Coyotes' offense while the Morrill squad was able to get good looks and score some points of their own. After going up 15-to-7 at the end of the first period, Potter-Dix started to find their rhythm offensively and scored some points, but had difficulty slowing the Lady Lions attack, especially from sophomore Kinzley Hess, who had the hot hand all game. After pulling a little closer through the second period, the Lady Lions put distance between themselves and their hosts and ended the half up 35-to-22.

It was a similar result in the second half as the Morrill defense dictated the pace of the game. Potter-Dix was plagued by turnovers and could not get inside to score. Morrill forced several bad shots, and limited the Lady Coyotes to just one point in the fourth quarter on their way to a 62-to-29 victory. Potter-Dix senior Kailey Nicklas led the scoring for the Lady Coyotes with 13 points in the loss.

Next, the Lady Coyotes traveled to Minatare for a match up against the Bayard Lady Tigers. With Minatare's girls team cancelling their season, the two teams needed to make up a game, and a neutral site was chosen to not give any advantage to either team. It did not make much of a difference, as the Lady Tigers look to be in mid-season form already, and will be a tough team to beat this year. They bolted out to a hot start against the Lady Coyotes on offense, and pressured the Potter-Dix offense into turnovers and missed shots, pulling away with a 28-to-5 lead after the first period. The Lady Coyotes could not handle the swarming defense of the Lady Tigers, could not effectively stop their scoring, and trailed 44-to-7 at the half. The Lady Tigers added 12 more points in the second half to take away the 56-to-11 victory. Nicklas again led the scoring, but this time with only four points.

Potter-Dix looks to get in the win column on Friday when they travel to Chappell to match up with the Creek Valley Lady Storm.