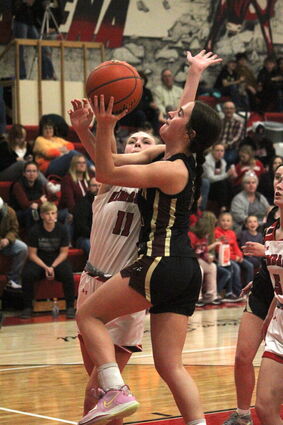 Leyton sophomore Zaili Benish drives the lane and gets fouled in the first quarter of the Lady Warriors' win over Kimball Friday.

Leyton's Lady Warrior Girls Basketball team opened their season strong with two big wins, on the road against Kimball on Friday and at home Saturday against Morrill.

Their season opener on Friday had them matched up against the Kimball lady Longhorns, a team that struggled with a 7-and-15 record last year. Leyton started fast, with sophomore standout Zaili Benish getting the scoring started with a three pointer followed by a field goal by sophomore Sydney Fortune. Benish nailed two more three pointers in the first period and at the end of the quarter and the score stood at 22-to-0 in favor of Leyton.

Leyton's defense played extremely well early in the game, disrupting the Kimball offense with a press that gave the Lady Longhorns trouble just getting past half court. The Lady Warriors created turnovers and moved the ball fast, converting on every opportunity for points. Fortune, junior Trinity Beutler and junior Claire Watchorn were very physical under the boards, shutting out Kimball rebounders and forcing bad shots. Zaili Benish scored on fast break opportunities on turnovers while the Leyton offense moved the ball and created shooting opportunities. Leyton opened a 41-to-10 lead at halftime, and continued to score while their defense shut down the Lady Longhorns in the second half. Leyton came away with a 70-to-18 victory, led by Benish's 35 points and 7 successful three point attempts. Fortune had 14 points in the victory.

On Saturday, the Lady Warriors played host to the Morrill Lady Lions, who were coming off a big win against Potter-Dix Friday night. This game was much closer to start, with both teams going on scoring runs with Leyton opening a 13-to-9 lead at the end of the first quarter. Morrill has shown so far in the season to have a fast and active defense, and they gave the Lady Warriors' offense trouble in the second period, limiting them to just four points. The Lady Lions narrowed the Leyton lead to 17-to-16 at the half, and again played great defense in the the third quarter while pulling ahead of the Lady Warriors. Going into the fourth quarter with a 25-to-24 lead, Leyton was finally able to beat the Lady Lions' defense, and started getting good shots to fall while generating turnovers and slowing down the Morrill offense. The momentum shifted quickly, and it all went to Leyton as they poured it on, scoring 26 points in the fourth quarter to cruise to a 50-to-34 victory. Junior Trinity Beutler led the scoring with 13 points, while sophomore Zaili Benish and junior Claire Watchorn each had 11 points int the victory.

The Lady Warriors next host the 2-and-0 South Platte Lady Blue Knights on Friday in Dalton. The defeated Arthur County 45-to-24 and won by forfeit over Minatare.