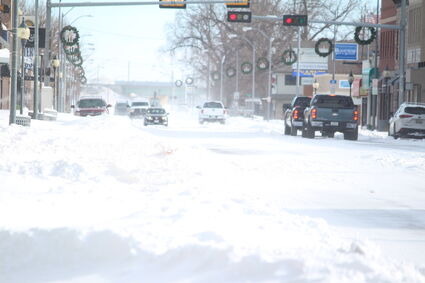 Illinois Street was passable on Wednesday if you didn't get too close to the deep snow drifts along the sides of the road.

Cheyenne County was hit by a massive winter storm late Monday night into Tuesday, shuttering schools and businesses and creating impassable roads throughout Cheyenne County and most of the panhandle area.

There was plenty of warning of the storm, with people making arrangements for the expected weather outburst during the weekend, but few were prepared for the amount of snow combined with persistent high winds that created massive snow drifts throughout the region.

The massive storm created chaos throughout most of the interior regions of the United States, and the system created damaging hail storms in eastern Nebraska and a series of tornadoes that did significant damage in Texas and Louisiana. The storm created massive delays in air travel, specifically with its effect on the hub airport of Dallas-Ft. Worth, where over 1000 flights were delayed and over 100 cancelled outright.

With blizzard conditions and snow amounts totaling up to two feet from Montana to western South Dakota and Nebraska already on the ground, the storm was expected to continue eastward and hit the upper Midwest states and then into West Virginia and the northeastern states. Residents in that area have been told to watch for a significant mixture of snow, ice and sleet as the system passes through late in the week.

A Blizzard Warning was issued from Tuesday through Thursday to all of western Nebraska, with the National Weather Service expecting up to 20 inches of snow to fall in the area. Gusting winds of more than 50 mph at times will create white out conditions and near zero visibility, officials said.

For most of the Sidney area, it was the gusting winds that caused the most problems, with many residents noting near zero amounts of snow on one side of their property, while the other side would have six or more feet piled up due to the winds. Road travel was nearly impossible, as the gusting winds created deep snow drifts that only highest clearance vehicles could transverse. All area schools announced closings for Tuesday on Monday morning, and by Tuesday midday extended the closings to Wednesday as well.

The Nebraska DOT closed down parts of Interstate 80 and Interstate 76 as the continuing high winds and heavy snow made travel extremely dangerous. The Nebraska State Patrol urged people to stay off the roads, and were busy dealing with several crashes and jackknifed semitrailers overnight.

The blizzard warning remained in effect until 11 p.m. on Wednesday, with Thursday and Friday's forecast looking for cloudy skies and near 30 mph winds with temperatures in the mid-20s for both days. Sun returns on Saturday and Sunday, but the temperatures should only climb into the low 30s and high winds should still persist.