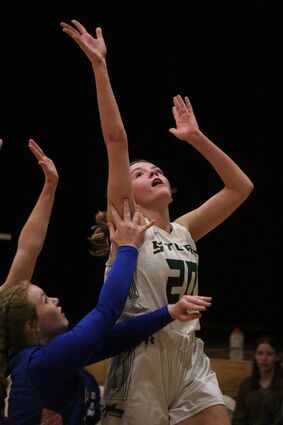 Creek Valley's Lady Storm Girls Basketball team has opened their season with three losses, but has shown a very physical a tough defense that has been keeping the team in games and gives hope for improvement as the season progresses.

After dropping their opener on the road against Hyannis by 10 points, the Lady Storm hosted Arthur County last Tuesday. Although the Lady Storm did not have the offense to keep up with the Lady Wolves, their tough defense made the visitors pay for every point they scored.

Senior Elizabeth Whiting and junior Ella Whiting were standouts on defense, causing turnovers and disrupting the Lady Wolves schemes while junior Samantha Marin and sophomore Ava Fraass clogged up the inside and created problems for Arthur County all night.

The Creek Valley offense could not handle the Arthur County pressure defense well, and from the start of the game their inability to get shots off put them in a hole, 20-to-8, at the end of the first quarter. Creek Valley's aggressive defense drew a lot of fouls, and the Arthur County girls did a good job sinking their free throws at the line.

Creek Valley's offense seemed out of control for most of the game, with turnovers and bad passes keeping the scoring output low. Although their defense played well, they gave up too many non-shooting fouls. Offensively, Ella Whiting is their most dangerous player, with good ball handling skills and the ability to drive the lane for points. The Storm team seems to play better when they play fast, trying to get the ball to Whiting to go inside for points. Unfortunately, their big girls Marin and Fraass too often hurried their shots when they had opportunities, resulting in no points and defensive rebounds for the Lady Wolves.

In the second half, Arthur County figured out a passing scheme to defeat the Creek Valley defensive press, and started to widen their lead. With a twenty point lead going into the fourth quarter, Creek Valley was forced to turn up the defensive aggressiveness, and saw their starting players start to foul out as the fourth quarter progressed. The game ended in a 62-to-37 win for Arthur County, but it was apparent that the Lady Wolves paid dearly for the victory against the aggressive Creek Valley defense. Ella Whiting led the scoring for Creek Valley with 14 points in the loss, followed by sophomore Karsyn Burgman with 12 points.

On Friday, the Lady Storm hosted the Potter-Dix Lady Coyotes, another team with good defense that struggles to score. Again, another defensive battle ensued, with the Lady Coyotes battling hard for points agains the Lady Storm, and both teams creating turnovers and bad passes. At 19-to-19 at the halftime break, Potter-Dix got hot in the third period on offense, putting up 17 points while holding the Lady Storm to seven points to take a ten point lead. But the Creek Valley girls weren't finished, and stormed back in the fourth quarter to chop away a the lead, and rally. The defense held the Lady Coyotes to just 5 points in the fourth quarter, but the Lady Storm offense could only muster 11 points, and were unable to overcome the 10-point deficit. Potter-Dix took the victory with a 41-to-37 score in a tough battle.

Creek Valley was scheduled to host Hay Springs on Thursday, but the game has been moved to Friday..