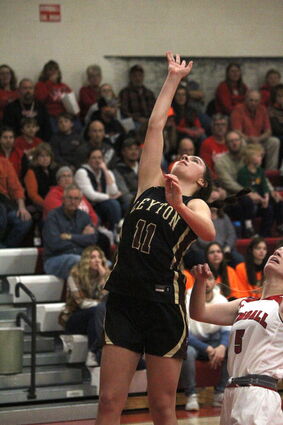 Leyton sophomore Zaili Benish puts up a layup during recent action. Benish has been the offensive standout for the unbeaten Lady Warriors.

Leyton's Lady Warrior Girls Basketball team remained unbeaten with a 3-and-0 record after surviving a late surge by the visiting South Platte Lady Blue Knights Friday in Dalton. After opening the season with a decisive win against Arthur County then a win by forfeit over Minatare, the Lady Blue Knights could not keep up with Sedgwick last Tuesday and dropped their first game. They then faced a 3-and-0 Lady Warrior team that was more than up for the challenge.

Led by senior scoring leader Hailey Koenen, the Leyton squad did a good job keeping the South Platte threat under wraps while sharpshooting sophomore guard Zaili Benish went to work. Both defenses played well, but the Leyton girls were able to get better looks and led 19-to-15 at the end of the first period. They continued the pace and added 16 more points in the second quarter to take a 35-to-25 halftime lead.

In second half, the teams battled hard in the third quarter, but South Platte was unable to make up any ground. Zaili Benish continued to score, and the Warriors still had a ten point lead going into the fourth period.

South Platte's offense battled hard and put up 15 points against Leyton's eight points, but it was too little and Leyton hung on for a three point, 53-to-50 win. Zaili Benish dominated in this game, scoring 34 points and going 8-for-10 at the free throw line. She also had five rebounds, two assists and four steals in the win. Sophomores Shawnee Gamble and Sydney Fortune battled hard underneath the net, each grabbing down 10 rebounds for the Lady Warriors.

Leyton had a match-up on Tuesday against Potter-Dix postponed due to snow, and were next scheduled to travel to Hemingford for a contest against the Lady Bobcats on Saturday.