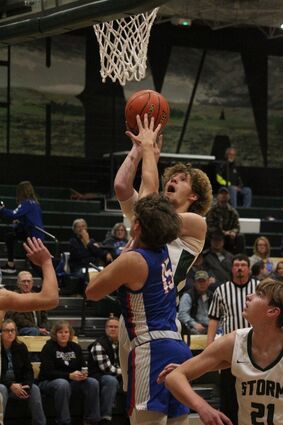 Creek Valley senior Hunter Martinez gets inside and goes up for two in the Storm's loss to Arthur County Friday night.

Creek Valley's Storm Boys Basketball team has opened their season with three losses, but the team is playing hard and showing signs of becoming competitive, and looks to get on the winning track as the season progresses.

After traveling to Hyannis to open the season and losing by 41 points, the Storm hosted an Arthur County team looking for their first win of the season, and had a battle on their hands from the opening jump. Creek Valley's big seniors, Hunter Martinez at 6' 4" and Seth Wilber at 6' 5", took on most of the action on offense and defense, and the big men were able to get inside and put up some shots while grabbing rebounds and playing solid defense. Freshman Zander Polk did a good job setting up the offense and defending, and the Wolves and Storm battled through a low-scoring first half that ended in a 19-to-16 advantage for the visiting Wolves.

The second half was similar, with both teams scoring a little better, but still battling hard for offense. The Wolves were able to muster a seven-point advantage through the final two quarters, and came out on top with a ten-point 48-to-38 victory. Martinez led the scoring for the Storm, with 13 points, followed by Wilber and Polk with 6 points each in the loss.

Creek Valley then hosted the high-powered Potter-Dix Coyote offense on Friday, and fell behind early and could not stop the crisp passing and strong inside game of the Coyotes. Potter-Dix senior Luke Kasten put up 24 points on 60 percent shooting to lead the way in a 68-to-18 rout. Martinez again led the Storm offense with 8 points in the loss.

Creek Valley was scheduled to host Hay Springs on Thursday, but with the snow storm that hit the panhandle Monday and Tuesday, the game has been rescheduled to Friday.