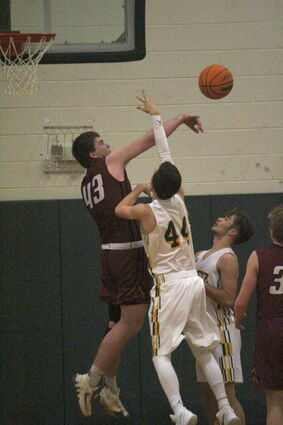 "No, no, no!" Peetz junior Mason Long puts up a shot but gets it swatted away by Leyton junior Jonathan Kruse during the Warriors' win over the Bulldogs Thursday night.

Leyton's Warrior Boy Basketball team continued their strong start to the season with a pair of convincing wins against Peetz and South Platte last Thursday and Friday. The wins move their early season record to 4-and-1, with all of their victories coming in convincing fashion.

On Thursday, the Warriors made the trip down to Colorado to match up against the Bulldogs, who came into the game with just one win early in the season. The Warriors offense started strong, moving out to an eight point lead at the end of the first quarter, while the Bulldogs regrouped in the second quarter and kept the game tighter. At 35-to-24 at the halftime break, the Warriors had a comfortable lead and continued with their game plan. With senior guard Cort Rummel setting the offense, the Warriors moved the ball around methodically, looking for senior sharpshooting forward Dillon Juelfs to score with an outside jumper our to move it inside and 6' 4" junior forward Jonathan Kruse drive for points.

The Warriors defense did a great job in the second half of disrupting the flow of the Bulldogs' attack, causing turnovers and bad passes that turned into Leyton points. Too often the Bulldogs left Juelfs open, and he made them pay repeatedly. By the end of the third period, the Warriors were up 16 points, and cruised the rest of the way through to a 64-to-48 win.

Juelfs led the scoring with 27 points, including two three-point hits. He did struggle at the charity stripe, sinking just one of eight attempts. Junior Chance Segelke led the Bulldogs' offense with 15 points in the loss.

On Friday, the Warriors hosted South Platte, who came into the contest undefeated with three wins. Again the Warriors got the early jump, and quickly built up an eight point lead at the end of the first period, 20-to-12. Then the defense clamped down on the Blue Knight's attack while the Warriors put up 19 more points in the quarter to make the score 39-to-19 at the half.

The Blue Knights needed a scoring outburst in the third quarter to get back in the game, but the strong defense of the Warriors shut them down, allowing only four points in the period while Leyton tallied 15 more points at add to their lead. The teams cruised through the final frame and Leyton earned the 64-to-30 win.

The Warriors have been solid in all facets of the game to start the season, and will be a tough team to beat for anyone on their schedule. An early-season matchup with Potter-Dix, which would have really been a good gauge of both team's status so far into the season, was cancelled by a snowstorm on Tuesday. Leyton's next matchup is on Saturday afternoon when the Warriors travel to take on the winless Hemingford Bobcats.