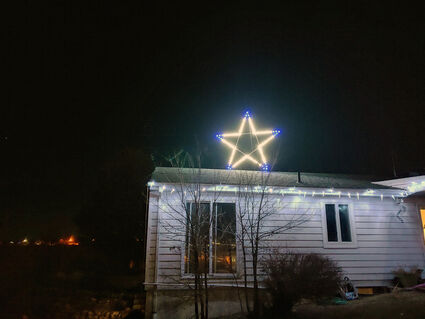 It's not often that someone inherits a hallmark of city history when they buy a house, but that is exactly what happened to Mary Brumage and her husband when they moved to Sidney three years ago.

"We moved from the rat race of Aurora, Colorado to our dream home in this amazing little town of Sidney," said Brumage. "Unbeknownst to us at the time, we also inherited a multigenerational holiday emblem, the Sidney Star."

Of course, when Brumage and her husband first looked at the house in 2019, they had no idea they would be inheriting such an item. In fact, while they noticed the star during a tour of the house, they didn't associate it with winter at all.

"As we toured the house, we went into the garage and looking up saw this huge, metal framed star hanging from the rafters," said Brumage. "Pointing it out to my husband, I said 'Wow, these people must have had some crazy dance parties in the garage.'"

When her husband mentioned it to the realtor, he smiled, according to Brumage. The realtor told the couple the star was a Sidney tradition and it would go on the roof of the house every Christmas. He told the couple that if they bought the house, the star would become their responsibility. It has been one the Brumage's have not taken lightly. Since buying the house, there has been only one year in which the Sidney Star didn't come out for Christmas.

"As we have met more of our community, everyone mentions that there was one year they remember the star not being there," said Brumage. "I can tell you it was definitely 2019 and it was because we were in the middle of purchasing our home and neither us nor the Youngs (the prior owners) felt that we had the right to put up the star."

On December 20, 2019 the home officially became the Brumage's, leaving little time to put up the star. Additionally, they already had plans to fly back east for the holiday and a winter storm struck Sidney after Christmas that year.

In the late 60s or early 70s, David built the Sidney Star and, every Christmas, bolted it to the roof of the house. The star was so bright, it could be seen from Interstate 80. Despite being secured to the top of the house, the star hasn't been immune to the high winds of the Nebraska panhandle. According to Brumage, the star was grounded in January due to 70 to 80 mile per hour winds.

"In early January, I was working in the basement and I heard a horrible boom above me. I immediately guessed it was the star," said Brumage. "Sure enough, it had broken and dropped onto the roof."

After talking with Suzy (Young) Ernest, one of David and Ibs daughters, it was confirmed that this wasn't the first time the star had fallen victim to the Nebraska winds. Unfortunately, this fall resulted in a bent pole and torn soldering.

It was due to these injuries the Sidney Star made its appearance later than normal this year. According to Brumage, her husband had to recruit the help of their neighbor to repair the damage done by the winds before it could make its annual appearance.

"Hopefully it will be a while before there is any more damage," said Brumage.

With the exception of the first year, she assures the Sidney community that as long as she and her husband own "the white house on the bluff", the Sidney Star will continue to be a Christmas tradition.

"And we are never planning to leave," said Brumage.