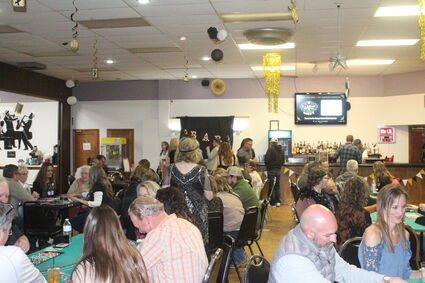 Sidney's Elks Lodge 1894's New Year's Eve Casino Night fund-raiser held on Saturday here in Sidney was a great success, with over 100 people coming through the doors of the Elk's Lodge and enjoying food, drink and a fun night of Casino Table Games for a good cause.

The night kicked off with a VIP Happy Hour at 7 p.m., featuring an open bar along with a vast array of hors d'oeuvres provided by Sonny's grocery store, which included delectable deli sliders to fresh shrimp. The event went into full gear after 8 p.m., and the room quickly filled with party goers, some of whom were dressed in their best 1920s-style attire. From flappers to gangsters, everyone was encouraged to stop by the photo booth to get prohibition-era snapshots of themselves and their party as a keepsake.

The table games ranged from poker, roulette and craps plus a cash Big Wheel to spin for prizes donated by local sponsors. Each party goer was given "casino money" to play as part of their entrance fee, and prizes were awarded to the biggest winner and biggest loser of the night. The Sun-Telegraph and Outlaw Motor Sports, the event's level-five sponsors, sponsored a high-limit table behind the stage for the serious players in the group. 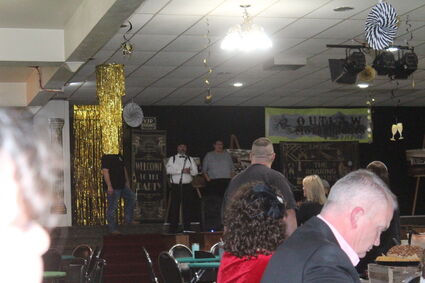 Elks member Rob Kuhns said on Monday that they didn't have a final tally but expected the event brought in between 10-15 thousand dollars for renovations for the Elks Lodge Building. The Elks Lodge has received a $415,000 historical grant for the project, which aims to restore the building back to its original grandeur, by removing the false ceiling in the main ballroom, upgrading the heating and cooling systems, windows, restrooms, and upgrading the electrical capacity. The Elks Lodge is planning more events to reach their goal and has applied for additional grants to complete the financing of the project.

The Elks Lodge building is currently the only venue that can host community and private events of significant size in Sidney and the southern panhandle region. It is important to preserve this historic landmark building to ensure the community always has a place for local events and gatherings.