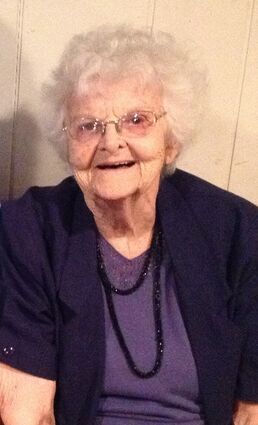 Ruth Marie Slama, age 96, of Potter, NE was called to her heavenly home by her Lord and Savior, Jesus Christ on Tuesday, December 6, 2022. Memorial services honoring Ruth's life will be announced at a later date. Cremation has taken place. Memorials made be made in care of the family for a later designation.

You may view Ruth's Book of Memories, leave condolences, photos and stories at http://www.gehrigstittchapel.com.

Ruth was born in Sidney, NE on June 4, 1926, to John and Grace (Foster) Sellers, the fifth of seven children.

After graduating high school from Sidney in 1944, she moved to San Francisco to work but missed home and returned to work at Sidney Ordinance Depot as a messenger carrier, which she loved because, according to her, the Italian prisoners being held there were cute.

Ruth and her sisters, along with most of Cheyenne County, attended the local dances and that's where she met the love of her life, Raymond Slama of Potter, NE. They married September 27, 1947. To this union were born four children – Michael, James, LuAnne and Mark. They lived on the farm north of Potter for 10 years before moving the farm house into Potter. They were lifelong residents of the Potter community.

Ruth was a faithful member of 72 years of the Potter United Methodist Church, joining in 1950. She had a beautiful voice – singing every Sunday in the choir sitting next to her best friend, Pat Wiekhorst. She was a member of the United Methodist Women's group where she will be remembered for serving countless dinners.

Raymond and Ruth were delighted to be recognized as Potter Days Grand Marshalls in 1999.

She was an excellent cook and baker – her raisin cream pies were always a hit at the Potter Days Youth Center stand. When the family would get together for the holidays, Ruth always made sure there were plenty of treats, but a special favorite of everyone were her Christmas cookies. She used to have to hide them or they would be gone before Christmas!

Ruth loved her grandchildren so much and would do anything for them. She sewed many items for them including dresses and PJs and she and Grandpa Ray were always willing to babysit whenever they were asked. The grandkids especially loved their Christmas stockings that hung on Grandma's banister.

She was dearly loved by her family and so many friends in the community. The family has so many loving, wonderful memories of a life well-lived!