Raiders Roll Over Tigers and Mustangs 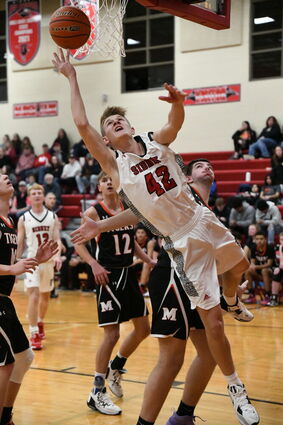 Sidney senior Koleman Kaiser battles under the boards to score two during the Red Raiders' win over Mitchell on Thursday.

Sidney's Red Raider Basketball team hosted the annual Holiday Tournament on Thursday and Friday, but weather complications forced the forfeit of the Chase County teams' Thursday games, leaving Sidney to face Gordon-Rushville in the final on Friday after thrashing the Mitchell Tigers on Thursday.

Thursday's game against Mitchell started off fast for the 4-and-2 Red Raiders, with Sidney building a comfortable lead thorough the first half, with the scoring highlighted by multiple three-point hits. Sidney's defense played well, but the Tigers were able to put through a few good series on offense, and kept within striking distance, trailing 35-to-22 at the halftime intermission.

But Sidney put the hammer down to start the third quarter, going on a 16-to-0 run to start the second half and put Mitchell in the rearview mirror. The Sidney passing game kept the offense moving and provided good shot opportunities while the defense frustrated the Mitchell attack. Sidney ran up a 59-to-28 lead at the end of the third quarter, and then coasted through the fourth, finishing the game with an easy 70-to-30 win. Junior Isak Doty led the scoring for Sidney with 18 points, 14 of them coming in the first half.

Sidney moved on to the championship game on Friday against Gordon-Rushville, a C2 team coming into the matchup with just one loss. But the Mustangs were no match for the Red Raiders on Friday, falling behind quickly to start the game and never recovering. Sidney led 30-to-13 at the half, and continued to out-score Gordon-Rushville in the second half.

The Red Raider defense did an excellent job disrupting the Mustangs passing and inside game, while the Sidney offense knocked down 11 three point shots to give the Red Raiders the 65-to-34 win. Although the Mustangs were quick and loaded with senior talent, the Sidney boys were able to pass the ball well and get good looks at the basket, all game long. Senior Jaeden Dillehay led the Red Raider offense with 17 points in the victory.

Sidney moves to 6-and-2 on the season with the win, and were scheduled to travel to Gering on Tuesday and host McCook on Saturday early evening.