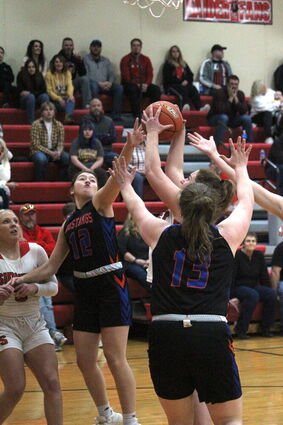 Sidney Senior Reese Riddle gets shut down trying to drive the lane during the Lady Raiders' loss to Gordon-Rushville Friday afternoon.

Sidney's annual Holiday Tournament had to be adjusted due to snowfall in the area that prevented Chase County from getting to Sidney for the first round, and ultimately forfeiting their Thursday games. The start times were moved up on Thursday in order to give the visitors from Imperial and Gordon more time to get to Sidney, but ultimately Chase County could not get to Sidney Thursday, and forfeited their games. Gordon-Rushville would be the opponent for the winners of the Sidney vs. Mitchell games, with Friday's third place games matching up with Chase County and the losers of Thursday's games.

The tournament started off with Sidney's Lady Raider team matching up with the girls from Mitchell. The offense and defense of the Sidney squad was hot on Thursday, easily brushing past the Lady Tigers 61-to-19. Sidney put up 21 points in each quarter of the first half and their defense stymied the Lady Tigers, limiting them to just 12 points in the first half to go into the halftime break up 42-to-12. Sidney continued to score in the second half while their defense clamped down on the Lady Tigers, only allowing seven points in the second half, to cruise to a first-round victory. Senior Rheagan Stanley and freshman Kierra Schrader led the scoring for the Lady Raiders with 13 points each in the win.

It was a different story on Friday when the Lady Raiders faced the Gordon-Rushville Lady Mustangs in the final of the tournament. The C2 Lady Mustangs came into the tournament at 4-and-1, their only loss coming to the C1 Ainsworth team. It seemed the Lady Raiders were on their way to another big game early on, jumping out to an 8-to-0 lead early, but then the scoring stopped as the visitors' defense tightened. All of the Sidney scoring in the first period came in the first three minutes, and the Sidney offense stalled as the Gordon-Rushville team did a great job of clogging up the inside and forcing long shots. After the first period ended with an 8-to-3 Sidney advantage, Gordon-Rushville clawed their way back to tie at 11-to-11. Senior Karsyn Leeling downed two three pointers and sophomore Zoey Christensen added another in the period, but other than those high notes, the Lady Raiders struggled throughout the second period trying to score. They had difficulty getting inside, and when they did, they didn't get many good looks as the Lady Mustang's defense smothered them. Sidney also had problems getting a good bounce, with stretches of missed layups and easy put-backs plaguing their offensive production. Fortunately, the Lady Raider defense kept up its solid play, and Sidney went into the halftime break up 21-to-17.

Gordon-Rushville continued their great defensive play in the third quarter, holding Sidney to just six points while the Lady Raiders committed in inordinate amount of fouls. The Gordon-Rushville offense started hot, scoring four straight points to tie the game at 21-to-21, before Sidney finally responded by pulling ahead with a 26-to-21 lead until the Lady Mustangs battled back to tie at 27-to-27 at the end of the third quarter.

Again Gordon-Rushville started hot to start a quarter, knocking down eight straight points to open a 35-to-27 lead. The Lady Raiders were unable to recover as their offense was getting stopped inside and was forced to fire away at long distance, with little success. The Lady Raiders showed little of the patience they usually have with their passing game, and took too many hurried and bad shots. Also, Sidney was in foul trouble to start the quarter, and put the Lady Mustangs at the line many times during their attempt to come back, and Gordon-Rushville did a good job at the charity stripe, keeping Sidney at bay. The Lady Raiders got to within three points late, but were unable to break through in the final minute and fell by a final score of 42-to-37. It was the Lady Raiders' first loss of the season, dropping them to 7-and-1. Junior Karysn Leeling led the scoring for Sidney with 11 points, followed by senior Reese Riddle and sophomore Kayla Westby with 5 points each in the loss.

Chase County defeated Mitchell 48-to-29 in Friday's opening third-place contest. After a first close half, the Lady Longhorns' offense found its' groove and outscored Mitchell 28-to-13 in the second half for the win.

Sidney was scheduled to travel to Gering on Tuesday and then host McCook at Sidney High School Saturday afternoon.