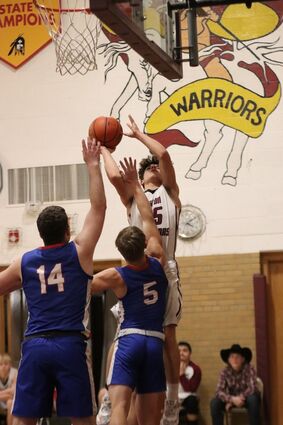 Leyton's Warrior Basketball teams competed in the Perkins County Holiday Tournament on Thursday and Friday, and the Warrior boys won both of their games to take the tournament title, while the girls lost a close game on Friday to take runner-up honors.

Both Leyton teams entered the tournament undefeated and playing well. The girls are led by sophomore standout guard Zaili Benish, who has an impressive 28 points per game average off of 56% field goal shooting so far this season. The boys are led by senior Dillon Juelfs, with a 16 point per game average of 43% field goal shooting. Both teams feature strong defensive play, and have been successful so far this season shutting down opponents' offenses while moving the ball around and scoring.

The girls started off with a match-up against Wallace Thursday, a team that has struggled with just one win early in the season. But they were ready to play on Thursday, and after Leyton opened a 10-to-6 advantage at the end of the first quarter, the Lady Wildcats came back in the second quarter and took a lead into the half at 19-to-16. Leyton battled back in the third quarter to trim the deficit a bit, but still trailed going into the fourth quarter. The Lady Warriors were able to out-score the Lady Wildcats by two points in the fourth frame to knot the score at 41-to-41, necessitating an overtime period.

The Lady Warriors put the clamps down defensively on Wallace, allowing just one score in the overtime frame while scoring 7 points of their own to come away with a 48-to-43 victory. After a surprising battle against the one-win Wallace team, Leyton moved on to the championship game on Friday.

Friday's match-up had the Lady Warriors face off with host Perkins County, and it was a tight game the whole way, with both defenses playing effectively and the teams battling back and forth. It was Perkins County that managed to edge past Leyton, and the hosts were able to take the game by a final score of 54-to-51. It was the first loss of the season for the Lady Warriors who moved their record to 6-and-1 on the season. 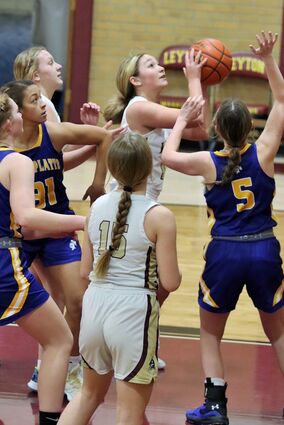 Leyton sophomore Lila McLaughlin battles through traffic to score during recent action for the Lady Warriors.

The boys' team started the tournament with a game on Thursday against Wallace, and were able to build on a lead and take away a comfortable 52-to-33 win to advance to the finals on Friday. Seniors Dillon Juelfs and Cort Rummel led the scoring for Leyton with 12 points each in the victory. Rummel had a great game defensively with six steals.

This set up a finals match up between the Warriors and the Plainsmen from Perkins County. The Leyton squad was able to start fast and grab a 15-to-8 lead at the end of the first period, and went into the halftime break up 20-to-14. Both defenses played tough in the low-scoring game. But it was a good third quarter by Leyton that put separation between the teams, and the Leyton squad was able to hold off a rally in the fourth quarter by Perkins County to take the win by a final score of 46-to-37. Rummel again led the scoring for Leyton with 16 points, and went 2-for-2 from beyond the three-point arc. The Warriors move to 8-and-0 on the season.