Some new faces among returning familiars 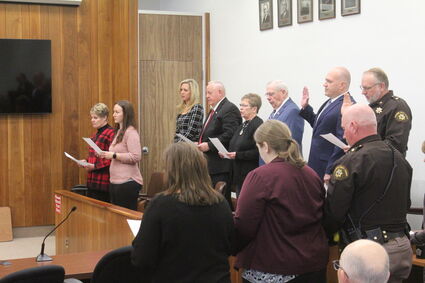 Weimers started the proceedings by saying, "This is a good day. Usually I'm here to take things apart, but today we get to put things together for the community's benefit. It's not often in my job that I get to do something positive, so days like today are always enjoyable."

Weimers then talked about the importance of the oath of office, how it is a solemn promise, just as important as taking the oath to serve in the military or marriage vows.

"An oath is an important thing. It is a promise, and it is a very serious one," he said. After the ceremony, Weimers had to leave immediately to conduct the swearing-in ceremony in Banner County.

Immediately after taking her oath of office, newly-elected County Assessor Jordan Hajek went over to her new office and met with the assessor's office employees. She was excited to get started in her new position, as she had plenty of time between the election and swearing-in ceremony to think about what she was planning to do, and now wanted to start implementing her plans.

"My first order of business is meeting with the staff and getting a game plan going for the values to be set in March. I appreciate everybody that supported me and I hope to see them come by to the Assessor's office," Hajek said.