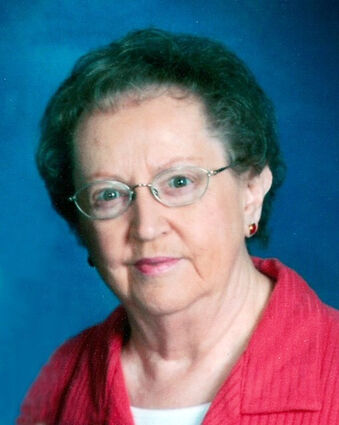 Marge (Gerk) Schmitt, age 90, of Sidney, passed away peacefully in Sidney on Friday, December 16, 2022. The Rosary will be recited at 10 AM with Mass of Christian Burial to follow at 10:30 AM on Wednesday, January 18, 2023 both held at St. Patrick's Catholic Church in Sidney with Father Lou Nollette officiating. A private family inurnment will take place at Greenwood Cemetery in Sidney.

You may view Marge's Book of Memories, leave condolences, photos and stories at http://www.gehrigstittchapel.com.

Marge was the loving wife of Vincent J. Schmitt for 68 blessed years. She was also a devoted mother, grandmother and great grandmother. Marge was born October 29, 1932 in Iliff, Colorado to Jake and Margaret (Sommers) Gerk. She was the fourth oldest in a family of twelve children. Marge graduated from Iliff High School in 1950 and began her career working in the purchasing department at the Sioux Ordnance Depot in Sidney. Fate stepped in and a coworker (Vince's sister) soon introduced Marge and Vince and they married in Iliff in May 1954. Together they raised four children, Stephanie, Wayne, Tom and Carolyn. Marge was devoted to her faith and to her family. She was a dedicated homemaker as well as an accomplished seamstress, baker, cook and advocate for special needs children and families. She is well known for her cinnamon rolls, brownies, Christmas cookie assortments and apple pies. She crafted and sewed anything from wedding dresses to Barbie Doll clothes to matching outfits for her young children. Her service to St. Patrick's church included many sewing projects such as banners, priest vestments and altar cloths. She also volunteered for the church rummage house, Altar Society, prayer line and many more. Marge loved her grandchildren dearly and she treasured all the hours with Nicki and Ben during their growing up years. Her most significant role, and the most impactful of her legacy, was the devotion and loving care for special needs daughter, Carolyn.

Marge is survived by her husband, Vince of Sidney, children Stephanie of Colorado Springs, CO., Tom of Fountain, CO., Wayne, his wife Marsie, and Carolyn, of Sidney, two grandchildren, Nicki and husband Jeremie Palko of Frederick, CO., Ben and wife Bryanne of Sidney, and four great grandchildren, Breckan and Brady Palko and Liviana and Milo Schmitt. She is also survived by one sister, Loretta Gerk of Littleton, CO. and brothers Herman Gerk of Iliff, CO., Bill Gerk of Ft. Collins, CO. and numerous cousins, nieces, nephews and Godchildren.