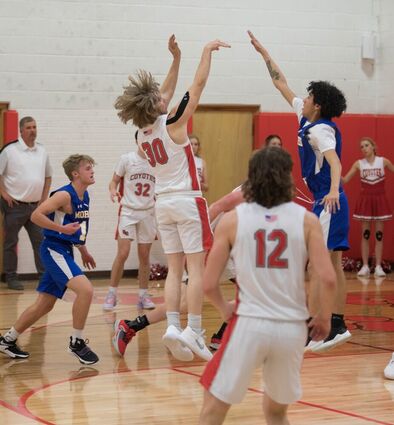 Potter-Dix senior Carter Wittrock scores from the top of the key during recent action. The Coyotes have started off with a strong 5-and-1 record.

The Potter-Dix Coyote Basketball team looked to continue their strong start of the season into the New Year, and had a close victory against Bayard followed by a blowout win over South Platte during the first week 2023 to show for their efforts.

The Coyotes traveled to Bayard on Friday, and the Tigers looked to be one of the few challenges the Coyotes had on their regular season schedule, coming into the match up at 5-and-2, with their defeats coming from out-of-class opponents Sidney and Alliance.

The teams battled hard throughout the match up, with stretches of no scoring by both sides. Potter-Dix scoring leader Luke Kasten was limited to just two points in the first half. In the second half, the Coyote offense started to break through he Tigers' defense and started to score, with Kasten finally getting his shot down and piling up 15 points in the final two quarter. Potter-Dix was able to pull away and hold off the Tigers in the fourth quarter, and took the victory by a 56-to-49 final score.

Kasten led the scoring for Potter-Dix with 17 points, while Bayard senior Trent Marques led all scorers with 24 points in the game.

The Coyotes next matched up with struggling South Platte, a team that opened the season with three straight wins, but then lost five in a row coming into the contest with Potter-Dix. The Coyotes took control of the game from the outset, putting up 17 points in the first quarter to take a 17-to-4 lead until the Blue Knights battled back in the second quarter to narrow the Potter-Dix lead to 25-to-15 at the half.