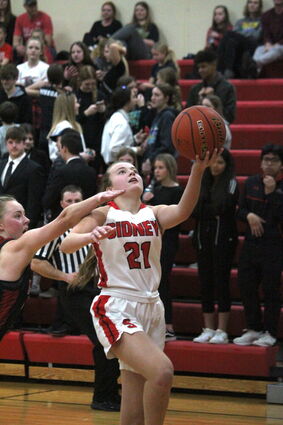 Sophomore Ryan Dillehay puts up two points on a fast break during the fourth quarter of the Lady Raiders victory over McCook on Saturday.

Sidney's Lady Raider Basketball team showed they had put their bad performance against Gordon-Rushville on December 30 in the rearview mirror as they opened the new year with two convincing wins over Gering and McCook. On Tuesday, January 3, the girls made the trip up to Gering to match up against the struggling 3-and-7 Lady Bulldogs, and had trouble in the early going against the tall and physical hosts.

The Gering defense did a great job limiting the Lady Raiders to outside shots, and they were off the mark in the first half. Sidney kept battling, but Gering opened up a 22-to-13 lead at the half. Head Coach Tyler Shaw made adjustments during the halftime break, and the Lady Raiders came out in the second half hot, attacking the Gering defense and finally getting their shots to fall from the outside.

Sidney kept inching closer in the third period, eventually narrowing the lead to 33-to-32 at the end of the third frame. Gering again pulled away to start the fourth, but with about seven minutes left to play, Sidney put the hammer down and went on a 20-to-0 run over the next five minutes of play, and put Gering away by a final score of 53-to-41. Senior Reese Riddle led the scoring for Sidney with 16 points.

On Saturday, the Lady Raiders hosted McCook, and finally played a team that didn't have a height advantage. Sidney's speed and sharp defense was on display early, as they opened a 9-to-0 lead early and never looked back. The Lady Raiders owned the inside, and the boards, and their defense held the Lady Bison to single digit scoring in every quarter. After opening a 26-to-15 lead at the half, the Lady Raiders continued their hot shooting in the third and had a big fourth quarter, tallying 23 points against just four as the Lady Raiders overwhelmed the Lady Bison for a 64-to-26 win.

Riddle and junior Karsyn Leeling each had 14 points in the win, and Sidney's bench players got significant minutes and did very well, scoring and shutting down the Lady Bison's offense. Sidney moves to 9-and-1 on the season and were next scheduled to travel to Mitchell to face the Lady Tigers on Tuesday.