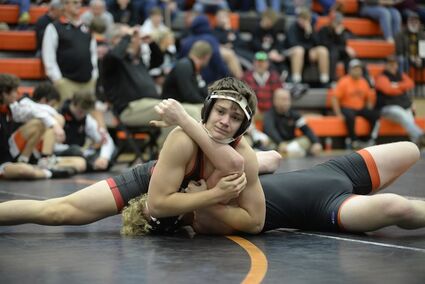 Sidney's Matthew Cabbage is in control during his match against Ogallala's Morgan Donason during dual action on Thursday.

Sidney's Red Raider Boys and Girls Wrestling teams traveled to Ogallala Thursday for a triangular meet with Ogallala and McCook, and were unable to defeat either team in their duals.

For the girls, Sidney matched up against McCook to start the day, and after four straight forfeits to start the competition, McCook's Payton Cox won by Fall at 120 lbs. Two more forfeits later and Sidney got their first win when Izabelle Owens won by Fall over Aubrie Seybold at 1:50 in the 135 lb weight class. The rest of the matches were all won by forfeit, and Sidney's lack of wrestlers caused the 36-to-24 loss to McCook.

Sidney started the dual with Ogallala the right way, when Jadyn Cottam won by Fall against Jalie Barnhill at 2:54 in the 110 lb weight class. Sidney then only won two more matches, both by forfeit, and Ogallala took the dual by a 36-to-18 score.

Against Ogallala, Matthew Cabbage won by Fall against Morgan Donason at 1:04 in the 170 lb weight class and Landon Hanes won by Fall against Leon Sybart at :41 in the 285 lb weight class. Ogallala took the dual by a score of 54-to-24. The boys next face off with Bridgeport on Thursday while the girls compete in the Chase County Invite on Saturday.