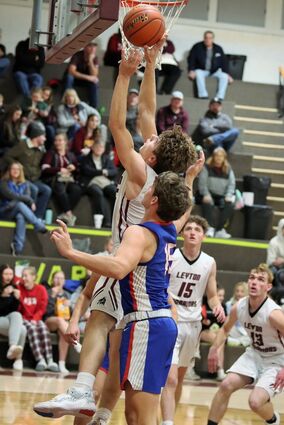 Leyton senior Justin Ernest and the Warriors are unbeaten at 9-and-0 and are going to be a tough team to beat in Class D1.

Leyton's Warrior Basketball team had a very strong start to the 2022-23 season, cruising through their schedule with almost every game won by a large margin. They started 2023 in similar fashion, hosting a tough Hay Springs Hawks team on Saturday in Dalton that started as tight battle, but eventually turned into a rout for the hosts.

Hay Springs was able to match up well defensively against Leyton in the first quarter, playing tight and tough defense while getting their offense in rhythm. The teams battled and came out knotted 13-to-13 at the end of the first period. But that's when the momentum shifted and the Leyton offense started to click. The Warriors' defense put the clamps down on Hay Springs, limiting their offense to low percentage shots and forcing 21 turnovers in the game. After lighting up the scoreboard with 21 points in the second quarter, the Warriors took a 44-to-19 lead into the halftime break.

Leyton stepped on the gas again in the third quarter, cutting and carving up the Hay Springs' defense and putting up another 25 points while the Hawks' offense fizzled. Hay Springs could only muster 16 points in the second half while Leyton cruised to a 71-to-35 victory.

Leyton stayed unbeaten and improved to 9-and-0 on the season. They are next scheduled to travel to play Bayard on Thursday.