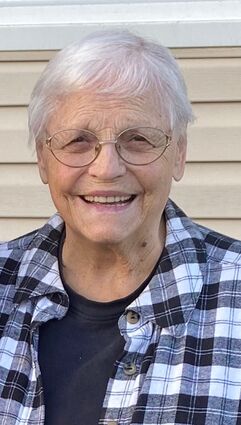 Karen J. Rehmer, age 85, long-time resident of Sidney, passed away peacefully in the early morning, Wednesday, January 11, 2023 at Sidney Regional Medical Center. She had entered the hospital just before Christmas where she was receiving care for a series of health issues. She was expected to be released this same day. Memorial services will be held at 10:30 A.M. on Friday, February 10, 2023 at Holy Trinity Lutheran Church in Sidney, NE with Pastor Chad Rademacher officiating followed by inurnment at Greenwood Cemetery and a light lunch back at the church. Cremation has been held. Services will be livestreamed on the Gehrig-Stitt Chapel Facebook page and recorded for later viewing on our website. Memorials can be made to the Holy Trinity Lutheran Church in Sidney.

Karen was born, Karen Jeanne Fredrick on September 20, 1937, on her grandparent's farm in Holyoke, CO. She was the middle of three children born to William (Bill) and Thelma Fredrick. Karen was raised in Alliance, NE, graduating from Alliance High School in 1955.

Her family soon moved to Sidney which is where she met Jack Wiedeburg. They married in 1957, and had four children together. While raising their family, Karen always held the role of homemaker, while at the same time she worked alongside Jack in their Grocery Store, North Side Market, and then the Montgomery Wards Catalog store. They remained married until the early 1980s.

Karen later met Ronald (Ron) Rehmer and they married in 1984. They continued to make their home in Sidney and Karen worked full time including checking groceries at Town and Country Market (Sonny's) and Customer Service at Cabela's. She ultimately retired from Cabela's at the age of 70.

Karen received the most enjoyment in her life through caring for and supporting her family. Whether it was staying up late to ensure all of the white shirts and red 'dogger' ties were in order for a 4-H event for her children, or picking up grandkids Meg and Jake from grade school and playing cards until dinner time, she was always serving her family. Karen also carried a torch to ensure no one left her home hungry! It was nearly impossible to enter her home and not be offered a meal, dessert or during the holidays, one of her amazing frosted sugar cookies, peanut brittle or bon bons!

While there wasn't a lot of time for hobbies while raising a family, Karen did make time to have some fun bowling on a league. She also joined a local sorority, Beta Sigma Phi, where she was a member for more than 50 years. After retiring, Karen and Ron were able to enjoy several years of camping and fishing together throughout western Nebraska as part of the Good Sam's Camping Club of Sidney.